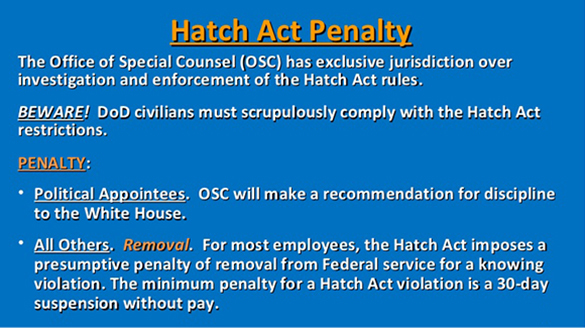 Trump may prevent Kellyanne from being prosecuted for these repetitive crimes, but she could see her license to practice law suspended in New York State for knowingly and purposely violating the Hatch Act. This comes at a time where many critics of President Trump are insisting he and his Administration believe they are above the law.

The Office of Special Counsel has recommended that President Trump fire his senior adviser Kellyanne Conway because of her repeated violations of the Hatch Act, which bans federal employees from using their office for partisan political activity.

The Office Special Council, which is the watchdog charged with enforcing the Hatch Act, called Conway a “repeat offender” because of her numerous violations. Kellyanne has been making increasingly scathing attacks on Democratic Presidential candidates during TV and on social media including those filmed on White House grounds, using her official status and her surrounding to lend to her credibility.

The Hatch Act of 1939, is intended to prevent pernicious political activities, is a federal law that prohibits employees in the executive branch of the federal government, except the president, vice-president, and certain designated high-level officials, from engaging in some forms of political activity. It went into law on August 2, 1939. The law was named for Senator Carl Hatch of New Mexico. It was most recently amended in 2012.

Any person violating the provisions of this section shall be immediately removed from the position or office held by him, and after that, no part of the funds appropriated by any Act of Congress for such position or office shall be used to pay the compensation of such person. SEC. 10. All provisions of this Act shall be in addition to, not in substitution for, of existing law. SEC. 11. If any provision of this Act, or the application of such provision to any person or circumstance, is held invalid, the remainder of the Act, and the application of such provision to other persons or circumstances, shall not be affected thereby.

Hatch Act violations committed by White House staff are typically handled by the president. Consequences for violating the law range from an official reprimand to a civil penalty of up to $1,000. Other penalties include suspension, termination, or even debarment from federal employment for up to five years.

The recommendation for Conway’s dismissal contained in a letter by Office Special Counsel to President Trump details specific comments made by Conway about Democratic presidential candidates Joe Biden and Bernie Sanders, whom she referred to as “two old white straight men career politicians” violates Federal Law.

She has also made statements on her Twitter account, such as referring to Biden as “Creepy Uncle Joe” and making disparaging comments about Senators Cory Booker (D-NJ) and Elizabeth Warren (D-MA), who are both seeking the Democratic presidential nomination.

“Ms. Conway’s violations, if left unpunished, would send a message to all federal employees that they need not abide by the Hatch Act’s restrictions,” said a letter from the OSC to Trump. “Her actions thus erode the principal foundation of our democratic system — the rule of law.”

“are deeply flawed and violate her constitutional rights to free speech and due process. Its decisions seem to be influenced by media pressure and liberal organizations.”

However, Groves assertion that the Hatch Act is unconstitutional fails to recognize it has been tested with several unsuccessful Supreme Court appeals that upheld its constitutionality according to Wikipedia …

“In a 1947 case brought by the CIO, a divided court found that Congress had properly exercised its authority as long as it had not affected voting rights. Justice William O. Douglas objected to the assertion that "clean politics" required the act's restrictions: "it would hardly seem to be imperative to muzzle millions of citizens because some of them if left to their constitutional freedoms, might corrupt the political process."

“In 1973, in a case brought by the National Association of Letter Carriers, a 6 to 3 decision found the act neither too broad nor unclear. The court's three most liberal justices, Douglas, William J. Brennan, and Thurgood Marshall, dissented. Douglas wrote: "It is no concern of government what an employee does in his or her spare time, whether religion, recreation, social work or politics is his hobby, unless what he or she does impairs efficiency or other facets of the merits of his job."

Making Kellyanne Conway’s exposure is more significant than she knows if she’s violating the Federal Law. During a May 29 interview said, “if you’re trying to silence me through the Hatch Act, it’s not going to work.”

The Office of Special Council statement follows a separate report in March 2018 that found Conway broke the Hatch Act in two interviews in which she “advocated for and against candidates in the 2017 Alabama special election for U.S. Senate.”

For those Trump supporters wanting to blame The Office of Special Counsel as being part of the deep state, the fact is Trump nominated the Henry Kerner who heads the office.

Violating a Federal Law over and over again is nothing new for the Trump Administration; there are more than a dozen Inspector General investigations currently in progress for violations of the law.

While President Trump can choose to ignore the legal violations, they could lead to the suspension of her license to practice law in New York State. An embarrassment most members of the bar try to avoid at any cost.