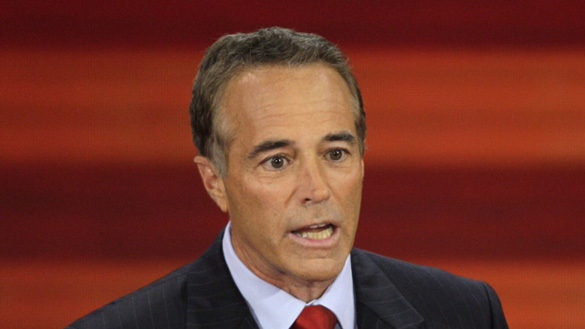 The hits keep on coming for the GOP.  New York Congressman, Chris Collins was indicted on securities fraud and arrested today. Collins, one of President Trump’s staunchest allies in Congress, was the first House Republican to endorse Donald Trump’s bid for the Republican presidential nomination. Congressman Collins is a member of the House Energy and Commerce Committee where he serves on three subcommittees: Health, Communications and Technology, and Oversight and Investigations.

Collins arrest and indictment is connected to securities fraud involving an Australian biotechnology company, Innate Immunotherapeutics. Collins sits on the firm’s board of directors. The Australia-based biotech company is trying to develop a treatment for multiple sclerosis.

Collins, last stock trade of Innate Immunotherapeutics holdings, was on June 20, 2018, when he sold shares $15,000 and $50,000 according to House periodic transaction reports. That sale was small compared to his overall trading in the company’s shares between 2016 and 2018 which amount to as much as a million dollars according to financial disclosures filed by the congressman. According to records presented by the SEC, Congressman Collins is the company’s largest shareholder.

The House Ethics Committee in August initiated an investigation into allegations that Collins had illegally shared nonpublic information about the company. This conduct violates House rules and standards of conduct as well as Federal Law.

According to our reporting here at WallStreetRebel.com, Collins profited illegally and recklessly shared nonpublic information to his son, Cameron Collins, who sold approximately $1.4 million of Innate Immunotherapeutics shares, according to a complaint filed by the Securities and Exchange Commission. According to the SEC …

“Christopher Collins knew or recklessly disregarded that he breached his duty by disclosing this inside information to Cameron Collins.” 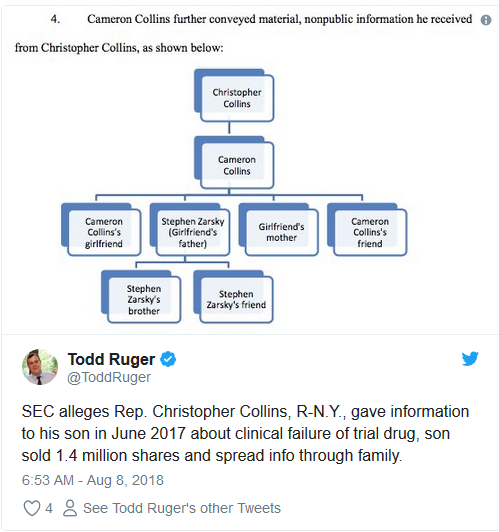 Collins finds himself indicted by a federal grand jury that also charged both his son and the father of his son’s fiancé, Stephen Zarsky.

“Make timely trades in Innate stock and tip others.”

Chris Collin’s son, Cameron then, according to the indictment, allegedly traded on that inside information and passed it to his fiancé’s father, Stephen Zarsky…

“so that they could utilize the information for the same purpose.”

Zarsky then, according to the indictment, allegedly traded on the inside knowledge and even passed it along to yet more named co-conspirators.

The SEC alleges in its indictment of the three named defendants that they avoided “over $768,000 in stock losses that they would have otherwise incurred” had they sold their stock after the information was made public, according to the indictment.

“We will answer the charges filed against Congressman Collins in Court and will mount a vigorous defense to clear his good name,”… “It is notable that even the government does not allege that Congressman Collins traded a single share of Innate Therapeutics stock. We are confident he will be completely vindicated and exonerated.”