Sidney Powell: All 'Trump Supporters' Were Innocent on Jan 6 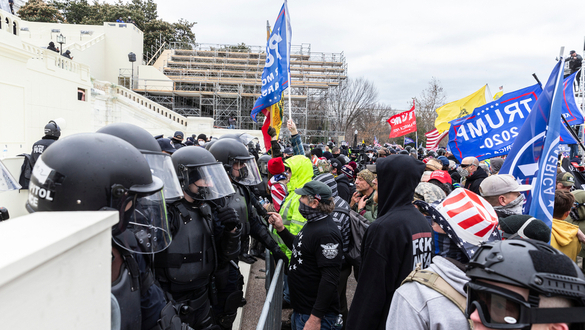 On Tuesday, pro-Trump attorney Sidney Powell accused the FBI of orchestrating the "entire" violent attack on the U.S. Capitol on Jan 6, 2021, saying it "was an FBI setup."

During an interview on Tuesday with Real America's Voice host Steve Bannon, a conman who cheated Trump supporters out of millions of dollars to build a wall on the southern border, that never materialized and resulted in his Federal Indictment, Powell explained why she was fighting for the people who are facing charges for their roles in the attack.

"We need lawyers to step up and help. We're having trouble finding people willing to work for them even for compensation because of all the blowback that the left heaps on anyone who stands up to seek justice."

Powell insisted that lawyers need to "show some backbone" and represent the rioters who she insisted "had no weapons" despite the literal score of videos showing the insurrections beating police officers with weapons they brought or made from objects on hand.

"Not a single weapon was recovered from the Jan 6 -- quote -- rioters," she said. No one was arrested on the scene. They were all hunted down afterward based on social media, much of which misrepresented the situation."

"The entire thing was an FBI set up," she continued. "I think Matt Gaetz and Marjorie Taylor Greene and Louie Gohmert are the only ones trying to draw attention to this."

Now keep in mind that it's very likely Powell will eventually be disbarred and bankrupted for her lies and her inept and incompetence as a lawyer.

"That's another bomb! What do you mean by that, and what have you got to back that up?"

"I think the FBI, as it has done in so many cases in the last, I don't know how many years, had infiltrated certain groups and had a significant effect in pushing this narrative of Trump supporters storming the Capitol."

Undaunted by his near long-term incarceration, Bannon wondered out loud if the FBI had conducted a "failed intelligence operation," but Powell threw gasoline on that, insisting…

"I think it's an abject set up by the FBI to try to entrap Trump supporters," she said, "and foment this whole -- quote -- insurrection narrative that we all know is not true."

"None of the -- quote -- felonies that these people being charged with are valid," the attorney added.

Powell is ignoring the steady plea deals by Jan 6 insurrectionists that have been piling up in recent weeks and went on to complain that some alleged rioters are being denied haircuts and nail clippings because they refuse to take a Covid-19 vaccine while in jail. She went on to say…

"We need pretrial release in light of the admission by the FBI of no conspiracy and really no offensive attacks of any kind,"

Powell and Bannon appear to be poking the FBI, which is like poking a hungry grizzly bear. Not a good idea for either of these two con artists.

Sidney Powell: 'The entire thing was an FBI set up