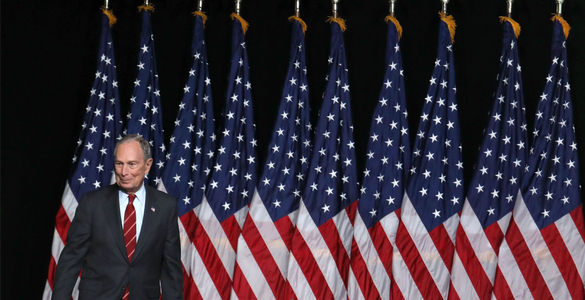 In January alone former New York City Mayor Michael Bloomberg has spent more than US$300 million on advertising for his Presidential campaign. He may be on the verge of breaking historic POTUS campaign precedence.

Michael Bloomberg’s spending of $300 million to campaign for the Democratic nomination for President could turn his long-shot campaign into a sure thing. Putting that in perspective, that’s more than former Secretary of State Hillary Clinton spent on advertising during her entire presidential campaign back in 2016.

The $300 million also amounts to more than President Trump and all of the Democratic candidates combined have spent at just $162 million.

President Trump predicted when Mayor Bloomberg announced the 2020 candidacy that the former Mayor of New York would only manage to poll at 5% and gave him the nickname “Mini-Mike.”  Now the latest Quinnipiac University National Poll released today shows the Bloomberg surging at 15% and in third place behind Senator Bernie Sanders at 25% and former VP Joe Biden at 17%. Even Senator Elizabeth Warren is polling at less than Bloomberg at 14% nationally.

Bloomberg’s TV and social media campaign are driving President Trump crazy. Bloomberg’s ads steadily attack and belittle Trump. Bloomberg bought a $10m Super Bowl ad that slammed Trump in the middle of the big game, then bashed Trump again in a national ad just hours before the State of the Union address.

Trump’s childish tweets are showing his frustration with Bloomberg’s tactics: they’re getting under the thin-skinned president’s fragile epidermis. According to one Trump adviser, the president “thinks that money goes a long way,” and those who believe Bloomberg has no hope are “underestimating him.” 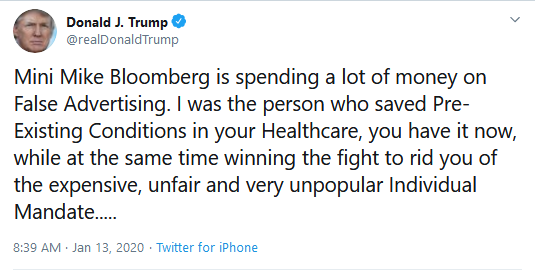 The rise in the polls for Bloomberg from only 2% to 5% then to 10% and 15% in literally less than two months proves anyone who underestimates him is making a serious mistake. Bloomberg’s wealth is estimated to be over $60 billion, and estimates put his yearly earnings in the range from $2-$3 billion. While Trump might be able to raise $1 even $2 billion in the next nine months, his net worth is estimated at 5% ($3B) of that of Bloomberg. The former mayor may be worth at the end of the day just shy of $90 billion and can drop $3-$4 billion into his and the Democratic 2020 election campaign without feeling it.

According to the Quinnipiac Poll among all registered voters, Democratic candidates lead President Trump in general election matchups by between 4 and 9 percentage points, with Bloomberg claiming the biggest numerical lead against Trump:

I suspect that we will be reading a lot more childess name calling Tweets from our president regarding his anxiety for Michael Bloomberg.