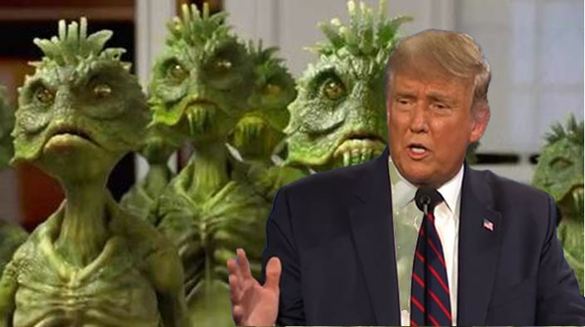 President Trump is so desperate so impaired by his fear of losing the election and being tried for dozens of crimes, including bank, tax, and wire fraud. We may see him literally declare Alien UFO’s existence as an October Surprise.

Don’t be surprised if Donald J. Trump asks all the TV networks to arrange a national address. He could spin a tale about proven evidence that aliens and UFO actually exist and have made contact with him to generate last-minute support for his re-election.

Don’t be surprised that a pathological liar is capable of telling the biggest fattest lie that any U.S. President has ever told in the closing weeks of this general election. Trump is mentally and capable of anything, telling an absurd lie regardless of how ridiculous it is.

During one of the most insane FOX News interviews with President Donald Trump ended on an odd note on Sunday after the host asked if the president was aware of unidentified flying objects (UFOs). A question that was clearly a setup question between Fox and Trump that had nothing to do with the interview subject that focused on Trump’s COVID-19 diagnosis.

“I’ve got to ask you this final question. Can you explain why the Department of Defense has set up a UFO task force?”

Trump has answered whether he believes in UFO’s and has said no in the past year. He’s dismissed the possibility of aliens visiting earth. He has now has flipped his response to create the buzz that may lead to a claim that only he can deal with an alien civilization….

“Well, I’m going to have to check on that,” Trump replied. “I mean, I’ve heard that. I heard that two days ago, so I’ll check on that. I’ll take a good strong look at that.”

Earlier in the interview, Trump showed his comprehensive insanity or lack of honesty, claiming he is “immune” from COVID-19 for an unknown amount of time.

Watch the video below from Fox News.