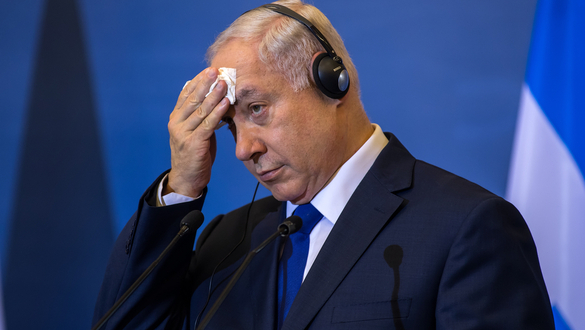 If it can happen to Israel’s longest-serving Prime Minister, could it happen to President Trump?

Israeli Prime Minister Benjamin Netanyahu was just formally indicted on charges of bribery, fraud, breach of trust by the country’s attorney general. Making him the first Israeli Prime Minister in the country’s history to be indicted while in office and sending Israel’s already stalemated political system into further disarray. Neither Netanyahu nor his political rival Benny Gantz has been able to form a government even after two elections.

Benny Gantz has repeatedly refused to form a coalition government with Netanyahu that would share power because of his insistence the Prime Minister would eventually be charged with crimes. While the indictment has upended Israeli politics, it may now allow one of Netanyahu’s ministers to work a compromise with Gantz that will stabilize Israel’s government.

The indictment brought by Israeli Attorney General Avichai Mandelblit caps almost three years of investigation and rampant speculation thanks to a 63-page indictment against the country’s longest-serving prime minister and Israel’s best-known politician.

The charges against Netanyahu center on allegations that the prime minister and his wife, Sara, accepted more than $260,000 worth of luxury goods in exchange for political favors. In exchange Prime Minister Netanyahu interceded with regulators and lawmakers on behalf of two media companies that amounted to bribery, fraud, and breach of trust.

Netanyahu has repeatedly denied any wrongdoing during Attorney General Avichai Mandelblit’s criminal probe, and like President Trump has dismissed the investigation as a politically motivated “witch hunt.”

In October, Prime Minister Benjamin Netanyahu’s lawyers spent four days in front of prosecutors arguing that the charges filed today should be reduced or dismissed. They were unable to persuade Attorney General Avichai Mandelblit, who was quoted a few hours ago as saying in a statement made during a news conference carried live on Israeli television…

“I made this decision with a heavy heart but with a whole heart and a sense of commitment to the rule of law… Law enforcement is not a discretionary matter. It is an obligation that is imposed on us. It is my duty to the citizens of Israel to ensure that they live in a country where no one is above the law, and that suspicions of corruption are thoroughly investigated.”

Political observers in Israel expect the prime minister to ferociously fight the counts the criminal charges while some are predicting he will seek a vote in parliament, granting him some measure of immunity in exchange for his resignation and accepting a ban from running for political office ever again.

Of more immediate concern, though, is how the indictments will scramble his standing in Israel’s chaotic political standoff.

Suzie Navot, a professor of constitutional law at the Haim Striks Law School in Rishon LeZion, pointed out during a press interview on the situation…

“We are in a historical and unprecedented situation with new legal questions almost every day.”

The Netanyahu indictment comes on the first day of an unparalleled phase in Israeli politics: a 21-day window in which any member of parliament can try to form a governing majority including the Prime Minister and his political rival Benny Gant.

Israeli law allows a prime minister to remain in office until he or she is convicted, however, Netanyahu has exhausted all of his legal appeals, so it is unclear if Netanyahu remains eligible to present a proposed government to Israel’s president.

According to professor Navot …

“This is a question that will be brought to the Supreme Court of Israel… I can imagine they will say the president does not have to give the mandate to an indicted member of the Knesset, that he can choose to give it to another member of the same faction.”

Known by the nickname “King Bibi” Netanyahu has dominated Israeli politics like few other leaders before him. In-office for ten years, he surpassed David Ben-Gurion as the country’s longest-serving premier.

One shocking correlation between President Trump and the prime minister is a recent poll that showed a majority of Israelis, 53.5 percent, thought Netanyahu should resign if indicted. Almost half, 47 percent, of his core right-wing supporters, thought the same. President Trump currently is saddled poll numbers that show 51% of U.S. citizens polls are in favor of his being impeached and removed from office, while 47% of those polled are in favor of his staying in office.