Senator Rand Paul Diagnosed with Coronavirus and is in Quarantine 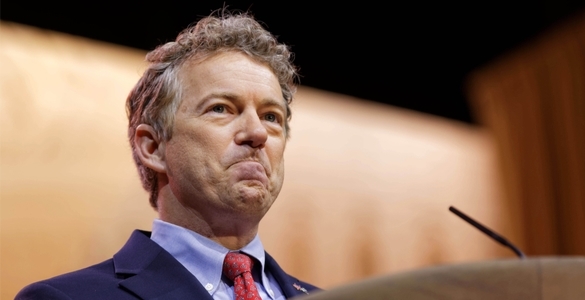 Karma can be a bitch. The 57-year-old Senator now awaits finding out if his diagnosis coronavirus will lead to COVID-19, which could lead to pneumonia and death.

Sen. Rand Paul (R-KY) opposed an emergency coronavirus package last week before the U.S. Senate; announced Sunday by Twitter that he has tested positive for the virus. In his announcement via his Twitter account, he said…

“He is feeling fine and is in quarantine…He is asymptomatic and was tested out of an abundance of caution due to his extensive travel and events.”

Many private citizens who have no political clout are also asymptomatic, however, they will find they will be denied the coronavirus test. 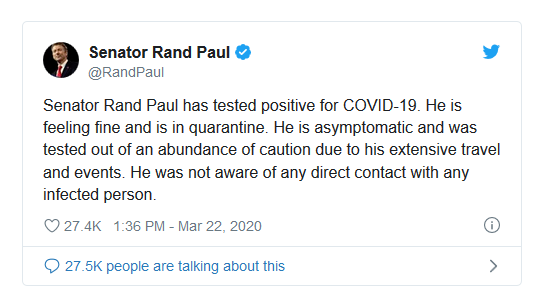 Paul, an ophthalmologist, licensed only to practice in Kentucky, was the only Senator to vote against an $8.3 billion emergency coronavirus package. He also was one of the eight GOP senators who voted against paid sick leave in a stimulus bill that passed with an overwhelming 90-8 vote last week saying….

“I think that the paid sick leave is an incentive for businesses actually to let employees go  and will make unemployment worse,” Paul explained to Newsweek.”

According to the World Health Organization, the COVID-19, the disease caused by the novel coronavirus, is particularly dangerous for people with lung problems. In August of 2019, Paul had part of his lung removed because it was injured when he was attacked by his neighbor Rene Boucher in a dispute over lawn care.

Many sitting Republicans Senators had lunch with Senator Paul last week and had direct social contact with him.  Reaction Sunday to the news, the senator has tested positive for the novel coronavirus created a stir.

In a statement to reporters, Senator Mitt Romney said that he was praying for Paul, who has decreased lung capacity due to recent injuries was quoted as saying…

“And of course, all the senators are going to seek medical advice as to what action we should take."

Romney confirmed he and other Republican senators had lunch with Paul two days earlier. 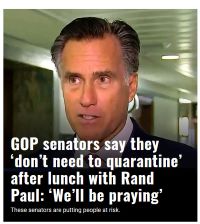 “We have to determine whether any of us should self-quarantine; as a result being in the same room.”

Just minutes later, Senator John Kennedy (R-LA) insisted that doctors had told him that he does not have to quarantine himself away from others. Kennedy revealed.

“We’re getting advice so far from the attending physician’s office that we don’t need to quarantine.”

In short, the GOP senator allowed President Trump and his incompetent administration to minimize the danger of the coronavirus virus, and the resulting possibly deadly disease that has flowered into a pandemic is now at risk of having being infected by one of their own. Given their ages and the danger of spreading the infection that can become a fatal disease, they all stand a 50/50 chance of dying from the disease if they get seriously ill.

Given Senator Kennedy’s unwillingness to quarantine himself, and the potential for infecting others and his sycophantic support of President Trump, it would be the ultimate karma if he and other Republican Senators and lawmakers were to fall seriously ill to this deadly disease in this not so "fake news" pandemic. Kennedy’s unwieldiness to quarantine himself could be the death sentence for many of the people he comes into contact with day-to-day.

When told during the coronavirus news conference late Sunday afternoon that Senator Mitt Romney had contracted the coronavirus, President Trump made a snide retort that indicated he was glad Romney is infected.