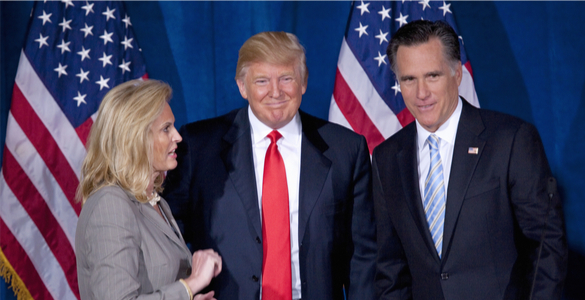 Every American should be proud of Senator Mitt Romney regardless of whether they agree or disagree with his decision to become the first U.S. Senator to vote for the conviction of a President of his own party.

It’s easy to become intensely jaded and cynical these days, thanks to the non-stop corruption and lies in the age of ‘Trumpism.’ Many believe a poll showing 75% thought that the Senate impeachment trial should have included witnesses. Now, after being acquitted along with a partisan line vote, we’re going to hear the witnesses like former National Security Advisor John Bolton and see more evidence leak out over through the November election and beyond.

Yet, one Republican U.S. Senator, Mitt Romney dared to vote for the conviction and removal of President Trump on Article 1 that accused him of abuse of power. A charge that many GOP Senators think Trump committed, but believed didn’t rise to the level that warranted his being convicted and removed from office.

Romney’s reasoning for voting for Trump’s conviction and removal was based entirely on his belief that the Democrat House Managers proved their case and his oath of office made to God as being sacrosanct. In a speech made on the floor of the Senate, Romney almost broke down as he discussed how intensely religious he is and why his oath before God forced him to vote for Trump’s conviction.

Amazingly he lamented in President Trump’s unwillingness even to allow John Bolton to testify because he had hoped something the longtime GOP foreign policy icon might give him a reason to acquit the President.

In refusing to surrender his religious faith and sticking to his oath, he made himself a pariah to his fellow Republican Senators. He made himself and his family a target to be regularly pilloried figuratively by President Trump and his supporters, including his niece Ronna McDaniel who is the current RNC Chairwoman.

McDaniel accused her uncle of lying about his religious reason for voting to convict and remove Trump from the presidency. When your own extended family turns on you and dismisses your religious conviction, your oath made to God instead of disagreeing with your conclusion. In a CNN interview, McDaniel belittled and demeaned the Senator with lies, distortions and insults. She stooped to President Trump’s playbook of dishonesty and venom.

King George III of England called George Washington a “great man’, after hearing that Washington would not become a king and surrendered power willingly after just eight years. Senator Mitt Romney is a great man and is a profile in courage for holding true to his religious faith and principals. Romney’s niece, President Trump and anyone questioning his religious reasoning for his deciding to vote the way he did, deserve universal contempt.