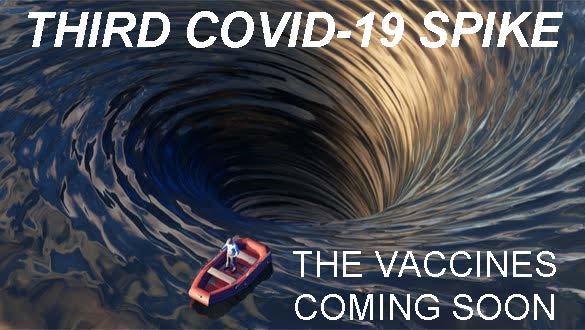 The financial crisis caused by President Trump’s reckless handling of the COVID-19 pandemic for state and local governments is going to disastrous as the third spike in the first wave of the pandemic hits the United States through the end of December.

President Trump promised that if he weren’t re-elected, Wall Street and the U.S. economy would collapse. Senate majority leader Mitch McConnell appears on course to do everything he can to fulfill Trump’s campaign promise.

The coronavirus pandemic’s third spike has already reached a horrendous death toll of 255,000 and escalating.  The number of infected is nearing 12 million American citivens and showing all the relief of a herd immunity plan.  Hospitalizations are approaching 80,000, a new record with over 22,000 people in serious or critical condition.

President Trump’s decision to resist social distancing, the wearing of masks means that between now and the end of the year, we could see the number of death spiral back to over 2,500 a day and infections surge to over 200,000 a day. States are beginning to shut down schools, restaurants, bars again and are limiting the sizes of social gatherings.

The fact is, the pandemic is entirely out of control, and unless dramatic action is taken, we could see 400,000 new infections a day and as many as 5,000 deaths a day because our health care system is overwhelmed. Even if the two vaccines announced won’t likely start reaching the public until May, which means a great deal of death and economic destruction will bankrupt most if not all 50 states, which are NOW all seeing an explosion of the pandemic.

Without passing a comprehensive $2.2 Trillion economic relief bill proposed and passed by Congress, Senate GOP Majority leader McConnell is setting the stage for what could be the most significant financial collapse in U.S. history. His ignoring Federal Reserve Chairman Jay Powell’s urgings for a big package in which he has stated there’s no danger of going big amounts to intentional ignorance but shows he’s back in the same mindset he was in January of 2009. Make Biden a one-term President by doing everything he can to prevent economic recovery.

A failure to put together a $2.2 Trillion economic relief package covering the lost tax revenue along with the pandemic’s explosive costs could end up pushing the number of under-employed and unemployed to over 40 million.  The McConnell approach to the financial crisis building is pure unadulterated insanity. It comes on top of his sycophantic blind allegiance to Trump, which includes his supporting the herd immunity strategy pushed by Trump’s (Dr. Josef Mengele), Dr. Scott Atlas, potentially kill well over 1 million Americans between now and the end of 2021.

My co-editor Geoff Garbacz called me yesterday with optimism that the Senate Republican members would shoot down the nomination of a completely unqualified candidate to joining the Federal Reserve Board. They did! Yet, before adoring the Senate for the Thanksgiving recess, these same senators confirmed another 100% completely unqualified Federal Judge. So was the rejection of the Federal Reserve nominee a hopeful sign that the Republican lawmakers in Washington are starting to break away from the vice grip of fear of not cow-towing to President Trump? Geoff believes it might be an encouraging sign.

For one, I believe that if McConnell refuses to consider both the $2.2 Trillion financial relief package and spend another $3 Trillion on a GENUINE infrastructure bill with the two months remaining of the Trump regime, the western world will sink into an economic depression. The Dow Jones, S&P, and even the Nasdaq could suffer a 50% correction from current levels.