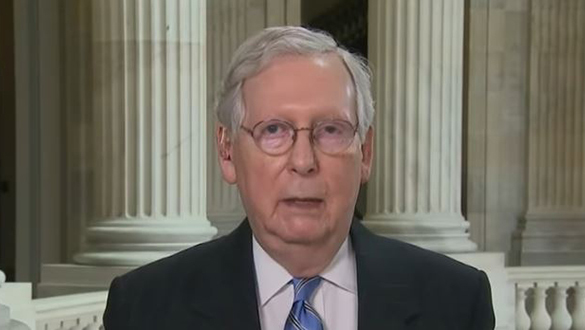 The Russian company that Senate Majority Leader Mitch McConnell bent over backward to accommodate to get them to invest in a Kentucky mill is a ‘proxy for the Kremlin’ according to Senate Intelligence Report.

Senate Majority Leader Republican Mitch McConnell has proven the validity for his nickname “Moscow Mitch” is a perfect moniker. The Senate Intelligence Committee report on Russian interference has now confirmed the Russians did, in fact, interfere in the 2016 election to benefit Donald J. Trump. So the “Russian Hoax” and “No Collusion” mantras so often repeated by Trump,  and members of the Republican Part amounts to a cover-up.

The Senate Intelligence Committee’s conclusion not only throws Trump under the bus, but it shows McConnell is a Russian puppet also, and this could severely damage his chances of re-election.

It’s well known that McConnell was a vital lawmaker involved in removing sanctions that allowed Rusal, a Russian aluminum company, to invest heavily in a mill that the North American company Braidy Industries has planned for Eastern Kentucky.

McConnell refused to confront Vladimir Putin during the 2016 General Election over his interference when asked by President Obama to do so with him in a united bipartisan way has now been exposed. It turns out McConnell’s unwillingness to stand up to Putin may have been connected to the newest revelation from the Senate Intelligence Committee report. The report reveals that Rusal, the beneficiary of the lifting of sanctions by the Trump administration, is a “proxy for the Kremlin including for Russian government influence efforts, economic measures and diplomatic relations.”

In 2019, Morgan Watkins, a journalist from the Louisville Courier-Journal reported that Rusal agreed to invest $200 million in Braidy’s mill. And the bipartisan Senate Intelligence report, released on August 18, 2020, describes Russian oligarch and Rusal co-owner Oleg Deripaska’s ties to the Kremlin (A big beneficiary of Trump’s cutting corners on sanctions imposed on Russia).

Watkins reporting indicates, based on a Securities and Exchange Commission report that Braidy filed in June, Rusal had provided $75 million for the mill as of December 31, 2019, but had discontinued contributions until Braidy could secure another $300 million in funding, which has yet to materialize.

This hasn’t stopped Trump from lifting imposed sanctions on Rusal, thanks to Kentucky’s two Republican senators — Sen. Rand Paul and Senate Majority Leader Mitch McConnell — who voted against keeping the sanctions in place.

Watkins notes that on August 19, the Kentucky Democratic Party has repeatedly questioned McConnell’s decision to support lifting the sanctions on Rusal in light of the Senate Intelligence Committee report’s identification of Rusal as a proxy for the Kremlin.”