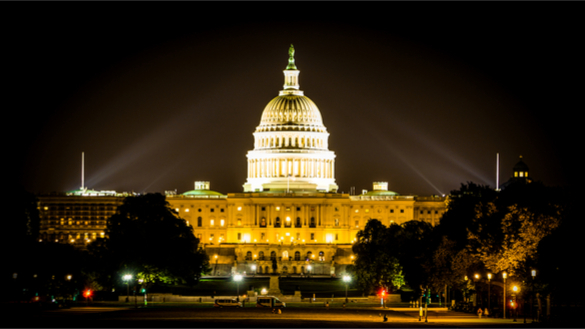 Senate Democrats have presented a new compromise version of a voting rights measure that contains provisions on voter access, election integrity, and removing a restriction on voter identification. A working group of Democratic Senators drafted the bill.

A group of eight Senate Democrats has agreed on a compromise that will align all 50 Democrat senators on new voting rights legislation. The compromise legislation was introduced on Tuesday after moderate Sen. Joe Manchin decided on the wording on the bill, which focuses on expanding voter access, boosting election integrity, and encouraging civil participation.

The bill has been named the "Freedom to Vote Act." It contains a long list of provisions that includes making Election Day a public holiday, requiring same-day registration at all polling locations by 2024. It ensures at least 15 days of early voting for federal elections. This bill is a compromise designed to overcome moderate Democrats in the Senate to two other voting bills, the For the People Act and the John Lewis Voting Rights Advancement Act that the House of Representatives passed along party lines, but after arriving in the sent the House bill did not advance in the Senate thanks primarily to the Trumpism anti-democratic sentiment that republican senators have embraced.

Senate Majority Leader Chuck Schumer, D-N.Y., said Monday in a speech on the Senate floor that he intends to hold a vote on the compromise legislation measure as early as next week. Schumer needs 60 senators to pass the legislation, which means ten republican senators are required to support advancing to the legislation. The reality is that former President Trump's opposition to democracy will make it impossible to persuade more than 4 or 5 Republican senators to vote for the bill.

"This is a good proposal, and I encourage all my Senate colleagues to support it," Schumer said, adding that "time is of the essence."

Sen. Jeff Merkley, D-Ore., said Monday evening on MSNBC that the bill "will have the support of every Democrat and Joe [Manchin] will be working to solicit the support of Republicans."

"As elected officials, we also have an obligation to restore peoples' faith in our Democracy, and I believe that the commonsense provisions in this bill — like flexible voter ID requirements — will do just that."

The "Freedom to Vote Act" is also designed to promote voter confidence and access by "requiring a uniform national standard for states that requires identification for in-person voting, and allowing voters to present a broad set of identification cards and documents in hard copy and digital form," a summary of the measure says.

The White House and Senator Manchin have been in talks the past few days when it became clear that the Senator and the other 49 Democrat Senate caucus were on board with the "Freedom to Vote Act" to consider a delicate modification of the Senate filibuster rule. Turning it back into the talking filibuster would require republicans opposed to the voting legislation to stand and speak nonstop to prevent the bill from advancing to a vote.

It's unclear whether all 50 Republican Senators are willing to speak one after the other nonstop to prevent a bill named the "Freedom to Vote Act." The strategy of modifying the filibuster could draw too much attention to the anti-democratic authoritarian ideology that underpins the republican opposition to passing the bill. It's conceivable that republican Senators Toomey (R-PA), Cassedy (R-LA), Collins (R-Maine), Murkowski (R-Alaska) could persuade enough Republican senators to pass the compromise bill with a few amendments if the California recall election shows that Trumpism is position going into the 2022 mid-term elections.

Suppose Trumpism is perceived as poison in Wisconsin, Pennsylvania, North Carolina, Georgia, Texas, and Florida. In that case, Senate republicans could decide to vote for a modified version of the - "Freedom to Vote Act."

It's widely believed that the law anti-abortion law passed in Texas which establishes bounties on women, and those that aid them in getting help terminating pregnancies after six weeks will result in a voter backlash that could deprive Republicans of winning back control of Congress and could cost them as many as four net seat losses in Congress.

There's also the pandemic to consider. Biden's mandates in a recent business survey appear to support as many as 70% of businesses affected. Businesses want their employees back at work and customers back buying. The strict approach of Biden's mandates could gain much more support from the public, which is divided if the number of infections, hospitalizations, and deaths starts to decline. This could also provide pressure on enough Senate Republicans to back the "Freedom to Vote Act" with more compromises and avoid modifying the Senate filibuster.

There's also the possibility that indictments of Rudy Giuliani, Donald Trump Jr, Ivanka Trump, and the former President could take place at any minute. In addition, Stephanie Grisham, a key gatekeeper in the Trump Administration's new book, could severely impact Trumpism in the next few weeks.