Utah’s junior Republican Senator Mitt Romney on Saturday morning pulled absolutely no punches in his response to President Donald Trump’s decision to commute the sentence of his longtime adviser and confidant Roger Stone. Describing it as an “Unprecedented, historic corruption.”

The question of whether there was a quid-pro-quo demanded by President Trump during his impeachment over his extortion of Ukraine’s President was a central issue.

We now know thanks to Howard Fineman’s interview of Roger Stone that his withholding the truth about the Russian efforts via WikiLeaks to help him win the election in 2016 was a quid pro quo that has led to Stones receiving a commutation for the conviction of 7 felonies.  We want to point out there is a difference between a commuted sentence and a pardon.  A pardon is an order that releases a convicted criminal without further punishment, prevents future punishment, or (in some jurisdictions) removes an offense from a person's criminal record, as if it had never been committed while commutation of sentence the change to a lesser penalty or punishment by the state. 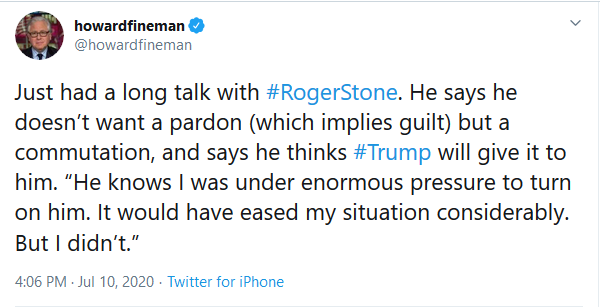 The depth of the corruption hasn’t escaped the attention of the 2012 Republican nominee for President Mitt Romney, now a U.S. Senator from Utah.

The president did not immediately respond to Romney’s comment. Romney was the only Senate Republican with the integrity, independence, and honesty to vote to convict Trump in his Senate impeachment trial.

Instead, Trump spent Saturday morning tweeting and retweeting dozens of posts, many attacking the presumptive Democratic 2020 nominee Joe Biden. This after, the number of coronavirus infection on Friday soared over 71,800 and as the number of deaths continued resurgence with over 800 yesterday. We are now returning to a fatality rate that will bring the number of deceased from COVID-19 to 250,000 by November 3, 2020, Election Day.

In a statement released Friday, the White House press secretary’s office said Stone had been “a victim of the Russia Hoax that the left and its allies in the media perpetuated for years in an attempt to undermine the Trump Presidency.”

Senator Romney has no doubt the Russian’s not only interfered in the 2016 election but coordinated their efforts through Julian Assange and Roger Stone. This is a crime neither has been charged with and which they could be charged should former Vice President Biden is elected president.