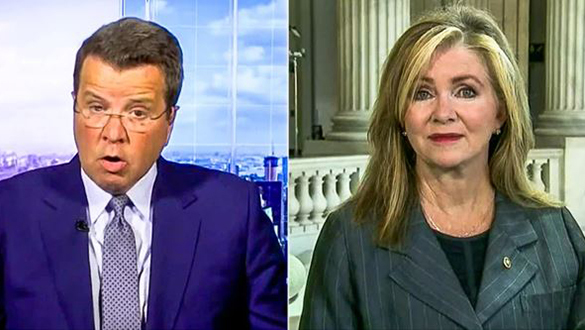 Hillary Clinton called Donald Trump on election night 2016 and conceded the election despite Trump and GOP’s lies that she didn’t.

President Trump and the Republican Party are approaching what could be the worst election result in a general election since 1980 when President Reagan defeated incumbent Jimmy Carter.

President Trump and Senator Black Burns (R-TN) claim that Clinton didn’t concede the election is an outright lie. The subject came up by Neil Cavuto the host of Fox Business Thursday asked if President Donald Trump might refuse to leave the White House if he loses in November peacefully.

After Trump tweeting the suggestion of “delaying” the election, Cavuto asked Sen. Marsha Blackburn (R-TN) if the president is…

“Setting up something? So you don’t think he’s setting up something if he were to lose, that he’s going to claim that it was rigged and he just won’t leave the White House — crazy glue his hands to the Oval Office doors?”

Senator Blackburn answered by lying about Hillary Clinton refusing to accept the results of the 2016 election.  This was something President Trump has recently asserted, even though it is widely known that Clinton was gracious in her loss and called Donald Trump on election night to concede. Ms. Clinton also attended the inauguration with her husband, President Clinton. Cavuto then pressed the question…

“So, if the president were to lose.” “let’s say, by a fairly comfortable margin — he might not like that — do you think he would say, ‘Alright, that’s it, I’m outta here?’”

“I think Donald Trump is going to win.”

“I understand that.” “In your heart of hearts, do you think if he were — if he were to lose that he would try to come up with a reason not to leave?”

“He has always honored the will of the American people.”