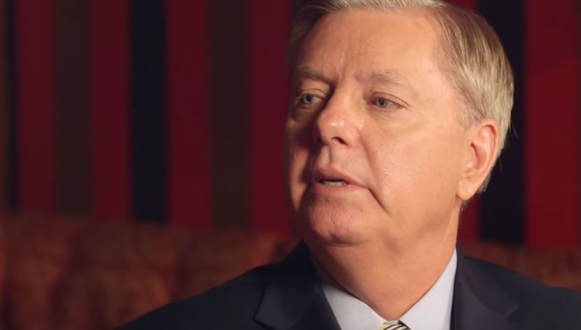 Blacks and Hispanics are NOT welcome to “go anywhere” in South Carolina unless they’re conservatives. This nonsense comes from a homo sexual pervert hiding in a closet for decades and jeopardizing our national security by hiding his illegally paying male prostitutes.

Sen. Lindsey Graham took a huge step in alienating every person of color in the State of South Carolina on Friday night, saying people of color are safe in South Carolina — but only if they are not liberal.

Hysterically while spewing his hate speech and racism, Senator Lindsey went on insist “I care about everybody,” speaking at a forum for South Carolina Senate candidates, but added…

“If you’re a young African American, an immigrant, you can go anywhere in this state. You need to be conservative, not liberal.”

The meaning hasn’t been lost on those hearing and reading his comments. Suppose you’re not going to support him and President Trump fascist, racist diseased anti-American and anti-democratic policies, and you’re a person in color. In that case, you’ll be arrested, beaten, and even murdered by South Carolina’s local and or state police for entirely peacefully protesting or being colored without a GOP membership card.

For that reason, companies and businesses in South Carolina must be boycotted and wiped off everyone’s maps for vacationing.

Senator Graham ironically holds the distinction of having the worst kept secret surround him in Washington. Known as “Lady G,” Graham has been frequenting male prostitutes in full drag for years. Engaging a prostitute in Washington D.C and South Carolina can be charged as a felony. Still, the bigger danger of his sexual perversion is the danger his behavior prevents to our country’s national security.

Making matters worse, Senator Graham has now repeatedly refused to take a coronavirus test and now is believed by many to have been infected. Regardless, he intends to hold hearing for President Trump’s nominee to replace Justice Ruth Bader Ginsberg for the Supreme Court. He has the same attitude as President Trump on race issues and has no compulsion to infect those he comes in contact with the Coronavirus.

His attack on people of color in the South Carolina is a calculated to get as many racist white conservatives or those saluting Trumpism to show up and win him re-election. It’s likely to see that virtually every black and Hispanic voter in the state and every liberal, progressive, and independent vote him out of office.

Regardless of the upcoming election result, Graham must be investigated by an independent prosecutor to determine if he has compromised national security secrets to protect his paying prostitutes for their services.