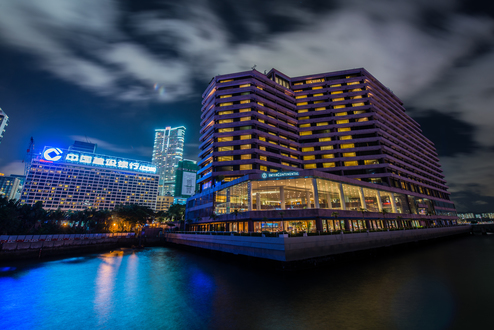 One of our favorite screens to run each day tracks stocks moving above the 50 day moving average. This screen also eliminates stocks that have been above the 50 day in the past five days.
The output in the table below is of stocks with a market cap above $5 billion and a stock price above $5.

From this list, our favorite idea is Huazhu (HTHT) that has seen its stock price fall from $49.60 to a current price of $29.70. The short rank is at 90% and historically the shorts make money only 50% of the time. When they make money, they make 10%. When wrong, they lose 40%.
We note that the Erlanger Option Rank is at 90% meaning that there is excessive bearishness for the shares. Once the stock is back above $30 then it could be off to the races. 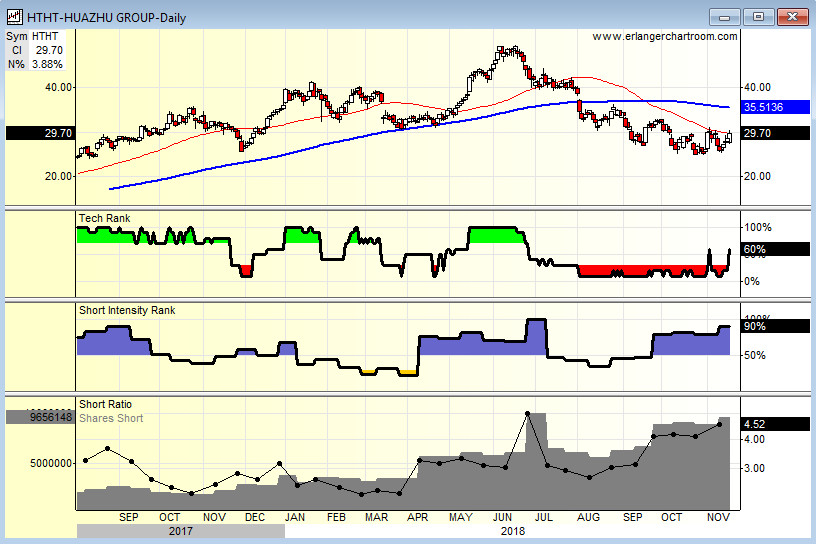 Clearly, the stock has been under pressure due to trade issues and a struggling Chinese stock market. A deal at the end of November or at least the framework of a deal could help Huazhu.
Huazhu develops and operates leased and owned, manachised, and franchised hotels primarily in China. The company operates hotels under the Hi Inn, HanTing Hotel, Elan Hotel, Orange Hotel, HanTing Premium, Starway Hotel, JI Hotel, Orange Hotel Select, Manxin Hotel, Crystal Orange Hotel, Joya Hotel, Grand Mercure, Novotel, Mercure, Ibis Styles, and Ibis brand names.
As of the end of 2017, it had 671 leased and owned hotels; 2,874 manachised hotels; and 201 franchised hotels in operation, as well as 37 leased and owned hotels, and 659 manachised and franchised hotels under development.
The company was formerly known as China Lodging Group, Limited and changed its name to Huazhu Group Limited in June 2018. Huazhu Group Limited was incorporated in 2007 and is headquartered in Shanghai, the People's Republic of China.
Definitions:
Technical Rank - The stocks relative strength against the S&P 500 over the last 100 days. The ranking system is from 10 to 100 in ten percent increments.
Short Ratio - Share short divided by average volume over the last twelve months.
Short Rank - The range of the Short Ratio over the last 5 years.
Power Rank - A proprietary rank of  the Technical Rank and the Short Rank into a composite score.
Type - There are four categories. Type 1 - Strong technical rank with above average short rank. Type 2 - Strong technical ranks with below average short rank. Type 3 - Weak technical rank with below average short rank. Type 4 - Weak technical rank with below average short rank.