Thanks to breakthroughs and accelerating technologies in 3D printing, scientists can now economically process moon dust to synthesize oxygen so man can now build Moon bases capable of supporting hundreds of workers, if not thousands. These technologies could open up affordable exploration of our solar system and the heavens above.

It’s long been known that the earth’s moon is covered in fine delicate dust named regolith, which by weight contains about 40% to 50% oxygen. Regolith, however, sticks to absolutely everything and is bound by oxides.

NASA and the European Space Research and Technology Centre (ESTEC) have been unable to figure an economical way to date to extract enough oxygen to generate breathable air on the moon capable of continuously supporting a permanent base(s) on the moon.

Scientific researchers at the European Space Research and Technology Centre (ESTEC) have been focused on the way to extract the oxygen contained in regolith using a method called molten salt electrolysis have focused on melting the regolith with lasers used by 3D printing or packing it into bricks to build habitats.

The ESTEC scientists and researchers believe that large autonomous drones are capable of moving along on the surface of the moon can scoop up or suck in moon dust into a metal basket.  Then the collected material would be delivered to a moon base factory that can use lasers for cooking the regolith to high-temperature lasers to combine it with molten calcium chloride salt, which then will allow the mixture to be exposed to an electric current to extract oxygen.

If that wasn’t enough, in theory, the waste produced after oxygen extraction produces usable metal alloys as a by-product that can be used by 3D printers to build habitable structures needed to construct a moon base(s). 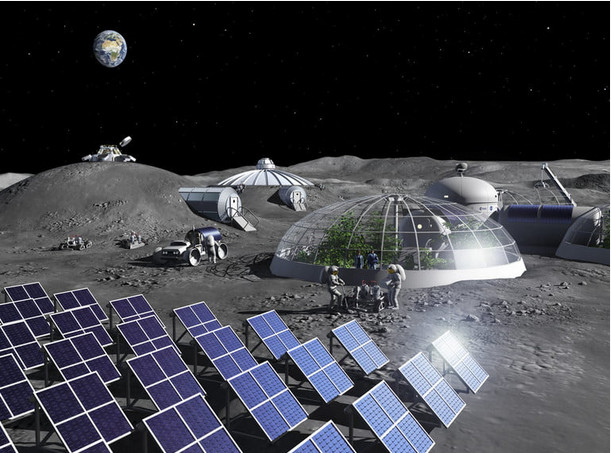 Now the technical problem of doing this may have been solved.

Ph.D. student Beth Lomax of the University of Glasgow explained in a statement…

“So we had to redesign the ESTEC version to be able to have the oxygen available to measure. The (ESTEC) lab team was very helpful in getting it installed and operating safely.”

The technique used by the Ph.D. candidate is not new. It was originally developed by the company Metalysis, which wanted a way to extract the metal alloys and considered oxygen the by-product. But Glasgow realized they could apply the technique to moon exploration…

“At Metalysis, oxygen produced by the process is an unwanted by-product and is instead released as carbon dioxide and carbon monoxide, which means the reactors are not designed to withstand oxygen gas itself,”

“The production process leaves behind a tangle of different metals…And this is another useful line of research to determine what are the most useful alloys that could be produced from waste produced; by the Oregon extraction process and what kind of applications could they be put to.”

“Could they be 3D printed directly, for example, or would they require refining? The precise combination of metals will depend on where on the Moon the regolith is acquired from — there would be significant regional differences.”

All of this portends a possible future where earthlings send drones and oxygen extraction processors to the moon that will facilitate the simultaneous construction of one or many permanent bases on the moon.