Russian Ruble One of the Strongest Currencies Worldwide 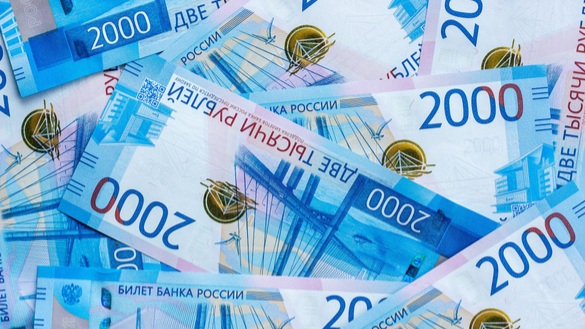 The Russian currency plunged in the weeks after Russia invaded Ukraine. The Russian currency has since strengthened to its greatest level since 2015 thanks to a mix of capital curbs, increased exports, and reduced imports. Officials are now assessing their options.

A mere three months ago, after the United States first levied economic sanctions on Russia, we saw headlines that read:

The eventual outcome of the crisis in Ukraine is still unclear. European embargos on Russian oil have still not gone into effect. Under the tight controls of Russian President Vladimir Putin, Russia has not only maintained stability over the Russian economy, but the ruble has also dramatically strengthened.

The value of the Russian ruble has been steadily deteriorating over the course of the previous 29 years.

Compared to the United States dollar in 1993, it had reached parity. However, by the time Russia invaded Ukraine on February 24, it was trading at only one and a quarter cents. 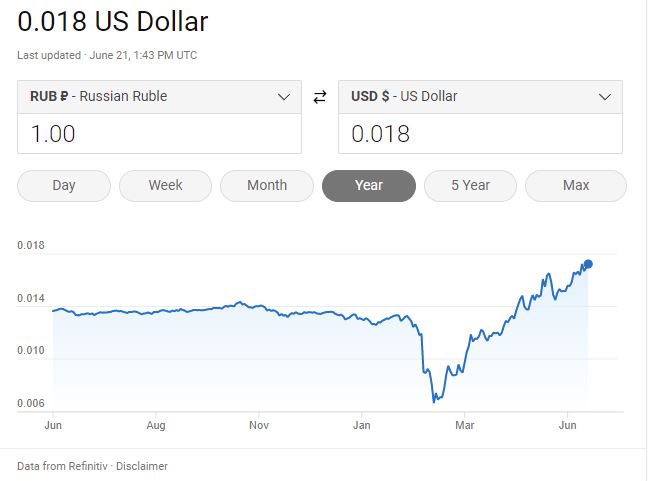 On March 7, less than two weeks after the initial drop, the ruble's value had fallen to only 2/3 of a cent.

Since then, it had increased to 1.8 cents when the market closed on Monday, which is its highest point ever.

This week, the ruble strengthened its improbable position as the currency with the best global performance, reaching fresh multi-year highs.

The ruble has made a remarkable recovery since it plummeted in the weeks following Russia's invasion of Ukraine, which resulted in the imposition of widespread international sanctions designed to bring the Russian economy to its knees.

Since June of 2015, it reached its highest level of trading against the U.S. dollar on Tuesday, when it was traded.

It has outperformed every major currency this year, gaining almost 35 percent. It has more than doubled from its post-invasion low.

The forecast for Russia's economy is bleak, with double-digit inflation and most economists predicting a deep recession. Even though the economy has held up better than many expected it would.

However, demand for the Russian currency has surged as a result of capital controls imposed by the country's central bank. These limits include those that require exporters to convert a portion of their revenues into rubles.

The ruble has maintained its high value due to increased earnings from oil and gas exports, which have skyrocketed as prices have increased and demand in Asia has increased to compensate for reductions in Europe.

At the same time, the volume of Russian imports has significantly decreased, which has contributed to the strengthening of the ruble. This decline is partially attributable to the departure of a large number of international enterprises from the Russian market.

Following the invasion in late February, the ruble's value plummeted to its all-time low against the dollar. In response, the Russian central bank more than doubled interest rates, bringing them up to 20 percent, as one of the measures it took to stem the flow of rubles out of the country.

Since then, certain limitations have been eased, and interest rates have been brought down to 9.5 percent, which is where they were before the invasion.

However, the ruble continues to rise, which helps relieve inflation and puts strain on Russia's budget, which is dependent on oil sales that are frequently denominated in dollars. The currency's strength helps ease inflation.

In the normal course of events, a nation that is the target of international sanctions and is engaged in a significant military confrontation will see investors exit the country and a constant outflow of cash, causing the nation's currency to depreciate.

Due to the robust nature of the ruble, Russia is somewhat protected from the severe economic sanctions imposed by western nations due to its invasion of Ukraine; however, the length of time that this protection will continue to exist is unknown.

The rise in the price of commodities is the primary factor behind the ruble's recent strength.

On February 24, Russia invaded Ukraine, which caused already high prices for oil and natural gas to increase even further.

The Russian Central Bank has also supported the ruble by imposing stringent capital controls, making it more challenging to change rubles into other currencies.

This includes making it illegal for foreign investors who hold Russian stocks or bonds to withdraw dividends or other earnings from the nation.

In the meantime, Russian exporters are mandated to transfer half of any excess income they earn into rubles, thereby increasing demand for the national currency.

(The criteria for the percentage of new customers has been reduced from 80 percent to 50 percent as of this week.)

In addition to this, as Orlova pointed out, it is incredibly difficult for international corporations to sell their stakes in Russia, which is still another barrier to the movement of wealth.

As a result of all of these factors fueling demand for rubles, the currency's value is increasing.

The economy has been temporarily buffered from the effects of sanctions thanks to the rebound of the ruble and the strength of Russia's oil exports; nevertheless, it is unlikely that this will continue for very long.

For instance, European countries have committed to reducing their purchases of Russian gas by two-thirds this year. This may be a devastating blow for Russia, given its reliance on revenue from energy exports.

Why is the Russian Ruble So Strong Right Now?