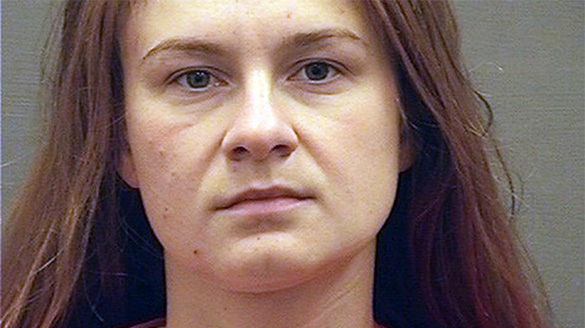 Butina moved from Federal D.C. prison to jail in Alexandria to the same facility Paul Manafort is currently being held.

Suspected Kremlin agent Maria Butina, has suddenly been moved from a Federal Jail in Washington DC to a lockup in Alexandria, Virginia, according to her lawyer without explanation. Here, lawyer, Robert Driscoll is telling the press that …

“I got a collect call from Maria from Alexandria Detention at midnight last night, but was disconnected before we could speak.”

“I couldn’t get into the facility last night but visited her this morning. She was not informed of the reason for the move. I was not notified of the move, and still am unaware of the reason.”

Justice Department officials have yet to comment on Maria Butina transfer to the William G. Truesdale Adult Detention Center. She has pleaded not guilty to charges she acted as a covert Russian agent, and her trial has yet to be scheduled.

The move may be related to the Russian Ministry of Foreign Affairs complaints that Butina is being mistreated in U.S. custody.  A graduate school at American University Butina went through significant efforts to build personal relationships with a long list of leaders in the conservative movement.

Although married she began a sexual relationship with Paul Erickson who was a board member of the American Conservative Union, who helped her build connections throughout the American right. It’s alleged that she paid him more than US$300,000 money that allegedly from Russian billionaire Konstantin Nikolaev and from Igor Pisarsky, prominent public affairs professional in Moscow whose firm has worked for the Kremlin for over a decade.