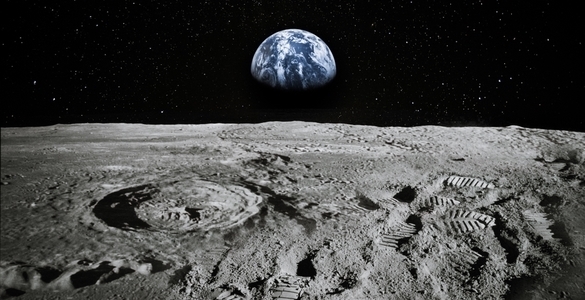 A new space race has begun as Russia and China agree on a memorandum of understanding on Tuesday, March 9, 2021, to set up an international lunar research station either in orbit or a lunar research base on the surface of the Moon.

Arthur C. Clark’s classic science fiction novel 2001: A Space Odyssey, written in 1968, envisioned a future where mankind would build orbiting space stations around the Earth, complete with hotels, restaurants, and teams of scientists from all over the world. These orbital stations could study the Earth and our solar system. He also envisioned these space stations to shuttle astronauts back and forth from one or more moon bases and later Mars and other planets.

Now Clark’s vision of the future is approaching at a torrent pace. Mega Billionaires Elon Musk and Jeff Bezos are on the verge of literally creating an entire space industry that could make them both the first entrepreneurs Trillionaires. Musk’s Space X and Jeff Bezos’ Blue Origin have developed the next generation of space ships that will make space flight an increasingly common event and begin mankind’s exploration of the heavens.

The acceleration of space technology taking place here in the United States had ended Russia’s monopoly on ferrying men into and back from Earth’s orbit last year when Space X flew a crew round-trip from the International Space Station (ISS). This accomplishment hasn’t escaped the attention of the Chinese and Russian governments.

The new accelerating technologies being achieved by the United States and its private space industry has forced Russia’s space agency Roscosmos China’s National Space Administration (CNSA) to agree to a joint venture to build one or more complex experimental research facilities on the surface and/or in the orbit of the Moon.

The Chinese and Russian memorandum envisions these experimental research facilities being available for use by other interested countries and international partners, the statement said, without details about the completion date.

Russia’s decision to re-focus its efforts on its space programs is being driven by an attempt to reclaim the Soviet Union’s inertia in space. This glory has suffered dramatically in recent years from a lack of financing and corruption. China’s interest in space exploration and development is based on recognizing that it cannot be a world power, much less one of Earth’s most dominant economic powers, without becoming a full participant in the space race.

In December, China evidenced its commitment to its reach in space by successfully bringing samples of the Moon back to Earth in the first mission of this type in over 40 years. China and France also have signed agreements committing to working together in the field of space exploration.

Meanwhile, space exploration is so important that even though the United States and Russia are amidst one of the coldest diplomatic periods since the end of the cold war, Moscow and Washington are still collaborating in the space sector.

The race back to the Moon is central to Elon Musk’s Space X that it’s planning a trip to the Moon that will even be open to several members of the public. A good many multi-billionaires are willing to pay the fare.

Neil Armstrong took the first steps on the Moon a half-century ago. With Artemis’s announcement, NASA plans to send the first man and woman to the Moon’s south pole by 2024.

Will this decentralized effort of countries create a new cold war in the future with Russia and China? The Artemis Accords, the most expansive and most diverse international human space exploration program in history in the field of space exploration, has been signed by:

The Accords are a uniting program with the countries previously listed to explore the Moon and establish vital principles to create a safe, peaceful, and prosperous future in space for all of humanity to enjoy.

Russia has already stated that the Artemis Program is too “US-centric” to sign it in its present form. China’s absence is explained by the US congressional prohibition on collaboration with the country.

The acceleration of technologies will become faster and faster as quantum computing, and energy technologies are developed. The great science fiction writers of the 19th and 20th Centuries imagined are becoming an everyday reality. All of this will lead to the creations of vast fortunes and new industries that could conceivably deliver a utopia on Earth and in our skies.

However, as mankind attempts to take one small step for a man once again, one giant leap for mankind. With his innate human nature, his insatiable knack for screwing up all technology advances with his petty politics, he will inevitably once again take two steps forward and one step back. Leaving the world wondering what we could have accomplished during the past fifty years once again.