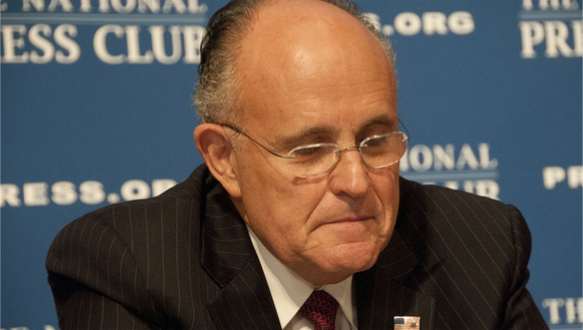 President Trump has tweeted hundreds of times that neither he nor anyone on his 2016 campaign ever colluded with Russia, calling the Mueller probe a witch hunt. Guiliani, Trump’s lawyer spontaneously admitted during an interview with CNN’s Chris Cuomo last night that he and the President don’t know if any of his campaign operatives did an abrupt reversal from Giuliani’s prior assertions.

“I never said there was no collusion between the campaign, or between people in the campaign. I have no idea,”

“There is not a single bit of evidence the president of the United States committed the only crime you can commit here, conspired with the Russians to hack the DNC.”

“I know the president wasn’t involved in collusion. How would I know about anybody else? I wouldn’t know”

In making these statements last night, Guiliani in effect admitted Mueller’s Russian probe charged within prosecutors investigating the alleged Russian meddling and interference in the 2016 election campaign to bolster Trump and hurt his Democratic rival, Hillary Clinton, is not a witch-hunt. This a day after Trump’s nominee for attorney general William Barr expressed his opinion that the probe isn’t a witch-hunt during his Senate confirmation hearing.

President Trump has repeatedly called the Mueller probe a witch-hunt hundreds of times during the past two years while U.S. intelligence agencies have concluded Russia and its GRU did interfere. Federal prosecutors have so far charged more than 30 people as part of their probe, including more than two dozen Russian individuals and entities.

The admission that Trump’s campaign may have conspired and or coordinated with Russian intelligence assets during the ‘16 campaign comes many months after several members of Trump’s campaign, including former campaign chairman Paul Manafort, have either been charged or pleaded guilty as part of U.S. Special Counsel Robert Mueller probe or in related investigations.

Speculation spread like wildfire in the media moments after Guiliani contradicted two years of President Trump’s denials, in tweets and in public remarks that any collusion with Russia occurred. Including his repeatedly accepting and siding with Russian President Putin’s denials that he and his country’s intelligence agencies had no involvement.

The resistance by President Trump to the facts that have been uncovered has expanded Mueller’s investigation to include any possible obstruction of justice by Trump and others.

All of this follows the release of blockbuster The New York Times article published last Friday that reported an FBI investigation into whether the former U.S. reality television star and real estate developer was working on behalf of Russia had been opened shortly after his firing of James Comey in May 2017.

Guiliani’s reversal on collusion also comes after a Washington Post report that raised questions about Trump’s handling of his efforts not disclose anything from five meetings he’s had so far with Russian President Vladimir Putin, including his the confiscating of his interpreter’s notes from those meetings.

Trump on Monday called the Post report false but did not offer any evidence to back up his claim, and said he never worked for Russia.