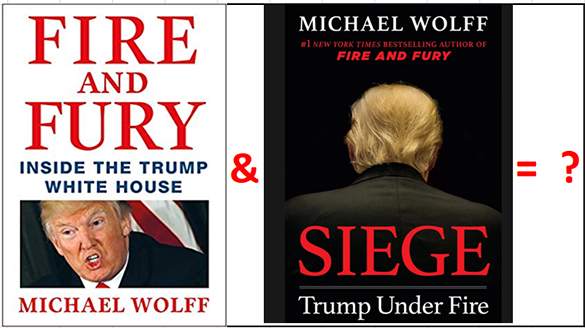 Michael Wolff in his new book the follow up to the NY Times Bestseller “Fire and Fury” Claims Special Counsel Robert Mueller  drew up a three-count obstruction of justice indictment against President Trump before deciding to shelve it – an explosive claim which a spokesman for Robert Mueller is flatly denying.

In his new book Siege: Trump Under Fire, written by Michael Wolf, the sequel to his bestseller Fire and Fury will be released on June 4. The book claims that in redacted documents, still not released from the Mueller investigation, the Special Counsel went as far as drawing up an indictment for obstruction of Justice indictments naming President Donald J. Trump.

The Guardian, based in the United Kingdom, is claiming they obtained a copy of Michael Wolf’s new book Siege and viewed the documents substantiating the claims. Wolf research prove his claims. Despite the admission by The Guardian; to have reviewed the documents Wolf is basing his claim, Peter Carr, a spokesman for Mueller, told the Guardian: “The documents that you’ve described do not exist.”

Is Peter Carr, a man with a great deal of credibility uninformed, splitting hairs, or is this another case of giving misinformation to deflate the real facts before they are seen by the public? Are the documents genuine? All of this controversy is likely to drive this latest Michael Wolff’s eagerly awaited new book into a best seller on day one of its releases.

Michael Wolff’s Fire and Fury was a no holds bar eye witness account of the outright incompetence and dysfunction within the Trump White House from day one. Despite repeated denials and accusations of “Fake News” by President Trump and his staff over Wolff’s accounts in his first book about the many events within it. Many of Wolff’s assertions were confirmed by later works, among them Fear: Trump in the White House by the Watergate reporter Bob Woodward and members of the Trump Administration that left the White House

Wolff’s Fire and Fury have generated sales of close to 5 million copies… moreover, led to the banishment of Stephen Bannon, who also lost his position at Breitbart News.

Mueller’s final report was delivered to the attorney general, William Barr, on March 22, 2019, and made public in redacted form on 18 April. Mueller’s summary concluded that the evidence uncovered by Mueller did not justify a that a conspiracy existed between President Trump and Russia claiming witnesses were impossible to interview because of distance, and willingness but did lay out 11 possible instances of obstruction of justice, leaving the decision to Congress on deciding what should come next.

Barr’s said he believed the 11 instances of possible obstruction were not conclusive, which helped Trump and his supporters claim the President was exonerated.

Wolff book according to the UK The Guardian reports that Mueller’s office drew up a three-count outline of the president’s alleged abuses, under the title “United States of America against Donald J Trump, Defendant.” The document sat on the special counsel’s desk, Wolff writes, for almost a year.

According to The Guardian, President Trump became unhinged and showed his Anti-Semitism when he learned Michael Cohen, David Pecker and Allen Weisselberg were cooperating with the Special Counsel and other law enforcement officials in New York State, City and at the SDNY!

“The first count (of the Trump obstruction indictment), under Title 18, United States Code, Section 1505, charged the president with corruptly – or by threats of force or threatening communication – influencing, obstructing or impeding a pending proceeding before a department or agency of the United States.”

“The 2nd count, under section 1512, charged the president with tampering with a witness, victim or informant.”

“The 3rd count, under section 1513, charged the president with retaliating against a witness, victim or informant.”

According to The Guardian.…

“Wolff writes that the draft indictment he examined, says Trump’s attempts to obstruct justice...“began on the seventh day of his administration. Tracing the line of obstruction from National Security Advisor Michael Flynn’s lies to the FBI about his contacts with Russian representative[s]; to the president’s efforts to have [FBI director] James Comey protect Flynn; to Comey’s firing; to the president’s efforts to interfere with the special counsel’s investigation, to his attempt to cover up his son and son-in-law’s meeting with Russian governmental agents; to his moves to interfere with Deputy Director of the FBI Andrew McCabe’s testimony …”

“The draft indictment, Wolff writes, also spelled out what Mueller considered to be the overriding theme of Trump’s presidency: the “extraordinary lengths” taken “to protect him from legal scrutiny and accountability and to undermine the official panels investigating his actions.”

“According to Wolff, Mueller endured tortured deliberations over whether to charge the president and even more tortured deliberations over the president’s power to dismiss him or his boss, the then deputy attorney general, Rod Rosenstein. Mueller ultimately demurred, Wolff writes, but his team’s work gave rise to as many as 13 other investigations that led to cooperating witness plea deals from Michael Cohen, David Pecker of American Media and Trump Organization accountant Allen Weisselberg.”

“The Jews always flip,” was Trump’s comment on those deals, according to Wolff.”

The justice department’s Office of Legal Counsel had said a sitting president could not be indicted. According to Wolff, Mueller’s team drew up both the three-count indictment of Trump and a draft memorandum of law opposing an anticipated motion to dismiss.

The revelations and the reaction to them next week are likely to headline stories next week and the week after. Buckle your seat belts!