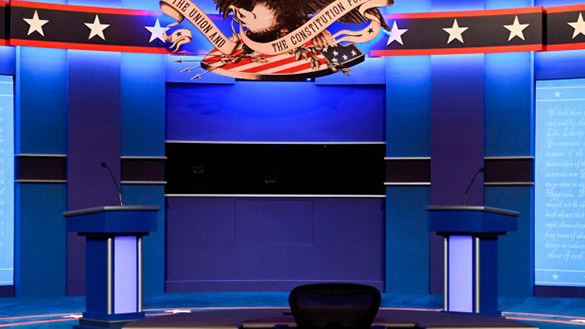 The Republican National Committee is exploring amending its rules to bar Republican presidential candidates from participating in Commission on Presidential Debates debates. It comes after Trump made the impartial panel a focus of his ire throughout the 2020 election.

The Commission on Presidential Debates (CPD) was established in 1987 to ensure that general election debates between or among the leading candidates for President and Vice President and between and among the leading candidates for Secretary of State are a permanent part of the electoral process. It is the primary objective of the Center for Public Debate to host and stage the quadrennial general election debates and pursue research and educational activities in connection with those debates.

On Thursday, it was announced that the Republican National Committee is contemplating modifying its rules to compel presidential candidates seeking the party's nomination to sign a pledge committing not to participate in any debates held by the Commission on Presidential Debates.

If the change is enacted and put into effect, it would fundamentally alter how presidential elections have been conducted in the United States for more than three decades.

Several years of antagonism between the Republican National Committee and the charity, exacerbated by former President Donald Trump's numerous complaints of unfair treatment by the commission, have culminated in the threat.

Finally, Trump denied the invitation to participate in the second 2020 debate because he was opposed to it being held virtually due to the outbreak of Covid-19.

'The Republican National Committee has addressed its concerns to the CPD in good faith,' she said.

A statement from the committee reads, "We have exhaustively documented why the party and its members have lost faith in your organization, and we have advised easy reforms that can restore trust in your debate process."

"Unfortunately, neither the tone nor the substance of your revised response instills confidence in the public that the CPD will adequately address the serious issues raised by the Republican National Committee."

Because of this," she said, "the Republican National Committee will begin the process of modifying the Republican Party's Rules to exclude future Republican candidates from participating in CPD-sponsored debates at our next Winter Meeting."

"The Commission on Presidential Debates' preparations for 2024 will be predicated on fairness, neutrality, and a firm commitment to aiding the American people in learning about the candidates and issues," the commission said.

On December 14, the commission wrote to McDaniel to inform him that it always reviews its processes between election cycles and that the process was now underway.

As part of the review, the group's co-chairs said that they planned to look at the impact of early voting and the process of selecting moderators for the session.

The televised debates are the only opportunity for voters to interact with the candidates in person. They force those running to express their views on a wide variety of domestic and foreign policy concerns.

According to Danielle Alvarez, a spokesperson for the Republican National Committee, the party explores a suitable substitute debate partner.

The committee does not support preliminary discussions at this time.

However, although the Republican National Committee (RNC) has the right to alter various party rules between quadrennial conventions, the choice to participate in the commission-sponsored debates will be decided by the GOP's final 2024 candidate, not the RNC.

Generally, the candidate has effective influence over the convention, which can easily overturn the rule imposed by party insiders if the nominee believes that participating in the debates is in their best interests.

It was created in 1987, according to its website, "to guarantee, for the benefit of American voters, that general election debates between or among the top contenders for the offices of President and Vice President [of the United States] constitute a permanent component of the democratic process."

Before the 2020 presidential debates, the Republican National Committee and the Trump campaign made public and covert attempts to influence the selection of the debate hosts.

Despite this, Trump argued that the moderators were biased against him, threatened boycotts, and ultimately refused to participate in the second general election debate since it would be held virtually due to the pandemic.

According to reports, Trump is considering a bid for president in the year 2024.

According to him, "regardless of the Republican National Committee's tantrum, voters can expect to hear from President Biden and Vice President Harris, both of whom are happy of their achievements."