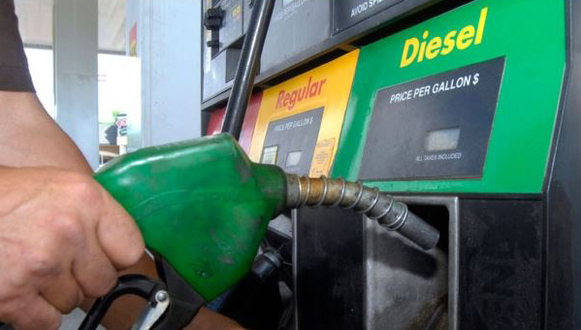 Diesel prices have increased dramatically owing to supply limits in the aftermath of the Russia-Ukraine conflict, followed by transportation challenges caused by low water levels on the Mississippi River.

The diesel market is currently experiencing reserves running low due to other unique circumstances, such as the Mississippi River experiencing its lowest water levels in 23 years, forcing more product to be shipped via rail and truck, and the possibility of a rail strike, all of which have increased prices that is expected to last for the foreseeable future.

Both low water levels and rising petroleum prices increase the cost of transporting products down the river. The current pricing for transporting cargo by barge is 246% more than it was only a decade ago, and it is 282% higher than it was in 2020.

Lack of rain in the Midwest upstream is the greatest threat to Mississippi River levels. The National Weather Service predicts that the river will continue to plummet to 10 feet below its average level until November 3. Typically, at this time of year, a front in the upper Midwest or a tropical cyclone off the coast of the Gulf will have raised water levels to bridge the gap between dry summers and wetter winters.

Since the beginning of the summer, the price of a gallon of gasoline has decreased by as much as one dollar, which has relieved many people of a financial burden. However, the price of diesel, which is the fuel that is used to drive trucks, trains, barges, tractors, and other construction equipment, has stayed persistently high, which has helped to keep the costs of many different products and services at their current levels.

On October 31, the average price of diesel sold on highways in the United States was $5.32 per gallon. The price per gallon is now 49 cents lower than it was on June 20, but it is still a massive $1.59 more than it was at this time last year. Meanwhile, the price of a gallon of regular unleaded gasoline was $3.86 on October 31. This is a 38-cent increase over the same time last year, but it is a $1.25 decrease from the top price of 2022, which was achieved on June 13.

The price of crude oil, determined on the international market, is directly correlated to gasoline and diesel fuel costs. After Russia invaded Ukraine in February, the price of each fuel increased precipitously almost instantly. However, their travels have taken quite different directions. In comparison, gasoline prices have only increased by 11 percent over the last year, while diesel prices have increased by nearly 40 percent.

Diesel's relative proportion of expenditures connected with refining is greater than gasoline's, coming in at 27% compared to 20% for gasoline. In addition, the percentage of expenses related to distribution and marketing for diesel is greater, coming in at 20%, compared to the 11% involved with gasoline. These distinctions explain a portion of the gap that exists between the retail costs of gasoline and diesel. 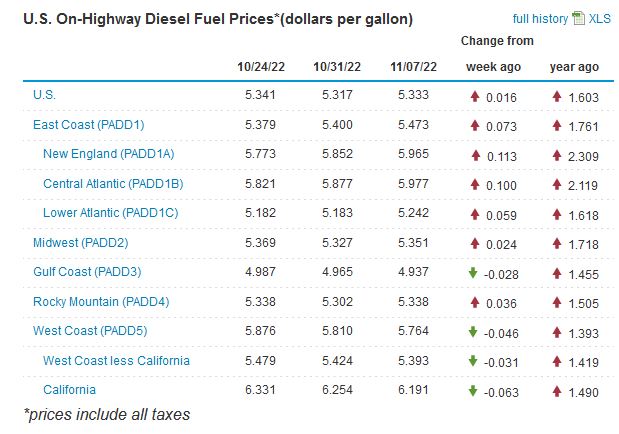 A decrease of around 180,000 barrels per day in diesel production capacity has been seen since 2019, regardless of the influence of Russia. This amounts to about 4% of the total diesel produced today.

Refining capacity in the United States has decreased over the last two years due to the closure of refineries at the beginning of the coronavirus epidemic, which has increased costs. A number of plants that were shut down at the beginning of the coronavirus epidemic are now being converted to create renewable diesel that burns more cleanly; however, these facilities are not yet operational. In addition, refineries' maintenance season has begun, further restricting supplies. Data from October 28 does suggest that production has picked up somewhat over the past week, meaning that some refiners have finished their maintenance with their full production capability back online. This is indicated by the fact that the data suggests that production has picked up.

Diesel fuel is in short supply around the globe, even in the United States, which has transformed into a net exporter of oil and petroleum products in recent years. As a result, diesel prices are sky-high. According to oil specialists, there are not enough refineries to match the demand for diesel, which is particularly concerning given the decline in Russia's energy exports that occurred when the United States, Britain, and a few other nations stopped purchasing Russia's energy exports.

However, refineries have started shutting down in other places. Over the course of the last several years, 5 percent of the capacity of refineries in the United States and 6 percent of the capacity of refineries in Europe have been shut down. In the early months of the coronavirus pandemic, a few refineries were forced to shut down or reduce their operations due to the precipitous drop in energy demand. Some of the nation's oldest refineries have been closed down because they were inefficient and their revenues were insufficient to satisfy Wall Street investors. Other refineries were shut down so that their owners could convert them into factories that create biofuels.

During the years 2021 and 2022, a significant portion of the world economy began to revive, which led to a rapid increase in the demand for diesel. However, when Russia invaded Ukraine, the government of Vice President Joe Biden decided to restrict oil and petroleum imports from Russia. This resulted in a daily loss of 700,000 barrels of diesel and other fuels, most of which were destined for the Northeast.

The International Maritime Organization made a decision several years ago that will require the majority of oceangoing ships to replace their high-sulfur bunker fuel with less polluting fuels beginning in the year 2020. This decision has contributed to the skyrocketing cost of diesel, which is now significantly more expensive than the cost of gasoline. Because of this, demand for diesel has been gradually climbing over the last two years.

As a direct reaction to Russia's continuation of its incursion into Ukraine, on March 8, President Joe Biden said that the United States would no longer buy natural gas, coal, or petroleum from Russia. It was well known then that the United States would only accept 3% of its crude oil from Russia in 2021. The prohibition applies to crude oil as well as other petroleum products.

On the other hand, a fact that receives less attention is that Russia was responsible for 20% of the United States imports of petroleum products in 2021. In refining crude oil, the United States adds several petroleum products, most notably unfinished oils and fuel oil, as a supplement to the crude oil. According to the EIA, a significant portion of the unfinished oils originating in Russia were used as supplemental input in refineries. These oils have properties comparable to heavier and somewhat high-sulfur crude oil. These oils with a greater sulfur content are used extensively in manufacturing diesel fuels.