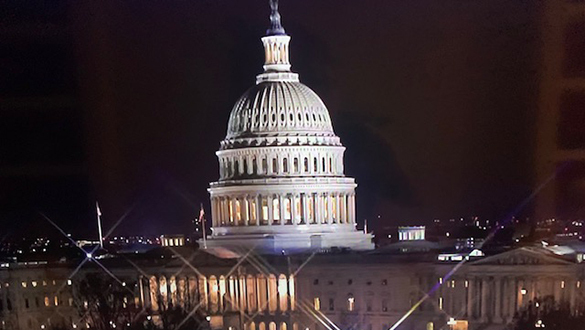 It is anticipated that the United States will reach its statutory debt limit later today, which will provoke a significant political struggle in Washington.

On Thursday, the United States will likely reach a congressionally mandated borrowing ceiling, forcing the Treasury Department to manipulate accounting to assure the federal government can continue paying its debts.

The debt ceiling being reached is the result of decades of tax cuts and increased government expenditure, both of which have been supported by Republicans and Democrats. However, it is also a warning of the upcoming entrenched political conflicts poised to dominate Washington in the coming months, which might result in economic shock, given the current climate of heightened polarization and split government.

The emboldened Republicans in the House have sworn that they would not increase the debt ceiling again unless they have an agreement from President Biden to make significant reductions in government spending. Mr. Biden has said that he would not discuss the conditions for an extension in the debt ceiling, and he has argued that legislators should raise the cap without any strings attached to fund expenditures that prior Congresses approved.

Treasury officials believe the steps they will start using on Thursday would allow the government to continue paying federal employees, Medicare providers, investors who own U.S. debt, and other receivers of federal cash for at least until the beginning of June. However, economic experts warn that the United States might be on the verge of a financial disaster and other types of acute economic suffering if Congress does not lift the ceiling before the Treasury Department uses up all of its power to purchase extra time.

Concerns have arisen partly because both sides have learned from the last decade's debt-limit battles. In 2011, House Republicans and President Barack Obama played a dangerous game of brinksmanship that almost led to a default on the United States debt. The crisis was averted only when Obama agreed to a set of limitations on future spending increases in return for raising the ceiling.

Most Democrats are now firmly entrenched in their belief that debt limit debates encourage Republicans to use it as leverage, thereby increasing the dangers of economic disaster. Especially true of Mr. Biden, who faced down Republicans and received a raise in 2021 with no conditions attached.

Republicans in the next Congress are determined to make good on their promise to prevent another failure to raise the cap by extracting concessions, angered by the frustration of their constituents and conservative advocacy organizations.

It's no secret that commensurate gains don't always match the Democratic Party's increased expenditure in tax revenue. In actuality, measures supported by both parties have contributed to the expansion of the national debt. When Republicans held the White House during the last twenty years, they often enacted tax cuts. Large economic assistance packages were approved by both parties to help individuals and companies weather the 2008 financial crisis and the 2020 pandemic slump.

Over a trillion dollars was lost in the federal budget deficit last year, the difference between what the government spent and what it brought in via taxes and other sources of income. In 2022, federal expenditure was about $6 trillion, or just under 24 percent of the GDP, down from its epidemic high of $8 trillion in 2022. Although the Biden administration expects the deficit to climb again in the current fiscal year, this is a decrease from the previous two years due to the expiration of emergency pandemic funding.

Many Republicans in the House of Representatives believe that the current level of expenditure and the amount of debt poses a risk to economic expansion. They have not yet presented any official demands regarding the increase of the debt ceiling, but they have been pushing for it to be tied to significant expenditure cuts and the adoption of a budget that would be balanced over the course of a decade.

Representative Chris Stewart, a Republican from Utah, was a guest on the Sunday edition of "Face the Nation" on CBS. He said, "there will be Republicans who will say we need to change." "We need to utilize this as a vehicle to attempt to set some constraints on our spending, our debt, and our deficits," said the president.

Officials from the White House have said that it is improper to put any conditions to increase the limit. They also claim that Republicans are not serious about cutting deficits and refer to the first measure that the new House of Representatives put up for consideration this month as evidence. The impartial Congressional Budget Office calculated that cracking down on rich tax cheaters would produce $180 billion over the course of ten years, but this proposal would eliminate additional funds for the Internal Revenue Service to do so. According to the projections provided by the office, the legislation proposed to remove that financing would result in an increase of more than one hundred billion dollars in extra budget deficits over the next decade.

There is still time for Congress to create a solution to increase the cap. The Treasury will likely keep using its "exceptional measures" for as long as feasible. However, suppose the United States draws closer to exhausting its cash reserves. In that case, the economic toll might begin to grow, and the government may be forced to default on its financial obligations to bondholders. Borrowing prices for companies and homebuyers rose in 2011 as investor anxiety rose due to the continuing deadlock.

It is expected that Treasury Secretary Janet L. Yellen's use of extraordinary measures to postpone a default will begin on Thursday and continue for at least the next several months. In the beginning, the Government Securities Investment Fund of the Federal Employees Retirement System Thrift Savings Plan will no longer reinvest its earnings into the Civil Service Retirement and Disability Fund or the Postal Service Retiree Health Benefits Fund.

If the impasse continues for much longer, Ms. Yellen will certainly be forced to take more action. She has estimated that the government should be able to satisfy its commitments by the beginning of June. It is impossible to determine the precise "X-date," which refers to the moment when the United States would no longer be able to pay all of its payments on time. This is because the "X-date" is dependent on the rate at which tax collections are coming in and the state of the economy.

The contours of the upcoming conflict are barely beginning to emerge at this point. The Republicans in the House of Representatives have been advocating for comprehensive "fiscal changes." Some Democrats have indicated that they are willing to look for methods to decrease expenditure, even though most Democrats support raising the debt limit without any conditions being linked.

In an interview that took place on Wednesday with the Fox Business Network, Senator Joe Manchin III, a moderate Democrat from the state of West Virginia, expressed his belief that Congress ought to resurrect the Bowles-Simpson deficit reduction plan from 2010 and combine and tie an increase in the debt limit to some of those ideas. Manchin made these statements. Despite the fact that he suggested searching for bipartisan measures to eliminate wasteful expenditure, it did not seem as if Mr. Manchin was willing to support any changes to the nation's social safety net programs.

Debt limit experts predict that as the "X date" approaches, enough Republicans will back down from the brink of default.

Officials at the White House have begun exploring various possibilities in secret for raising the limit, including actions that may take months to force a vote on a debt-ceiling rise with primarily Democratic support. They have said several times that they believe Congress will increase the limit, but they haven't exhibited much hope that Republicans would compromise during talks.

The debt ceiling crisis need not occur if the limit is not exceeded. Increasing the statutory cap on U.S. debt, as Congress might do, would solve the issue.

However, other Republicans are certain that raising the debt ceiling should go hand in hand with reductions to social programs like Social Security and Medicare. The chances of a default on purportedly "risk-free" Treasury debt, which may disrupt the global financial system, have increased thanks to the arrangement California Representative Kevin McCarthy reached with recalcitrant Republicans to become House speaker.

Since the prices of almost all financial assets across the world are fixed in reference to Treasuries, it might be argued that if the U.S. Treasury failed, there would be nowhere safe to go. It's hard to fathom since it would make the whole financial system riskier overnight.

As far as anybody can tell, the debt limit has never been breached. The potential economic and market implications are unknown if it really occurs this time.

To succeed as an investor, you need a healthy financial reserve. To protect your wealth, you may put part of it in government-insured banks. You should evaluate your risk tolerance realistically since a debt limit crisis might trigger prolonged market drops. Before reading about impending market disruptions, you should decrease the risks you are incurring if you know you cannot manage them.

The market seems to view these worries as quite unlikely at this point. The markets' pessimism about the debt problem may be justified. Demand for Treasuries is strong, and the stock market, which had fallen for most of last year, has been rising steadily since the fall.

After all, the debt ceiling has always been increased by Congress, and the United States has always been able to borrow enough to pay its payments, despite several difficult incidents spanning decades. These measures have helped keep the dollar and U.S. Treasury bonds at the top of the global financial system and have even helped increase their position.

Despite this, the markets have responded unfavorably whenever Republicans in Congress have used the debt limit as a weapon to obtain concessions from the Democratic president and congressional leaders. It's been rough in some episodes.

Suppose the Treasury does reach its debt limit Thursday. In that case, it can probably continue paying its bills by reducing government expenditure. According to Mr. Spratley, money market funds will continue to operate even if there is a brief, contained default of individual Treasury securities; however, in the event of a widespread panic, where investors sell their holdings in droves, "it will be a government problem, and the government will have to step in."

However, a Treasury default might cause widespread panic. Some money market funds froze up in 2008, and bond funds were hit hard by the market panic that accompanied the 2020 outbreak of the coronavirus. There is a high risk of further disruption for both monetary systems.