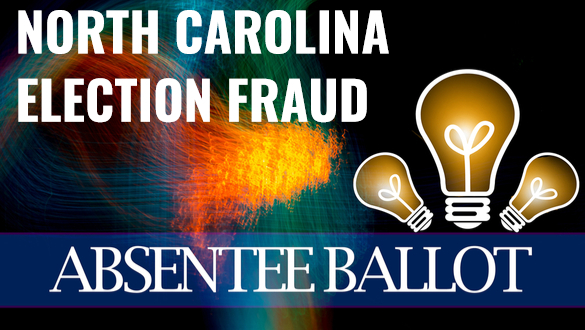 President Trump and his GOP allies have been claiming election fraud for years, and yet the only election fraud uncovered was a single voter in Texas, a registered Republican and a GOP political operative in North Carolina whom it appears has been trying to fix elections for years.

Republican political operative McCrae Dowless, and four other people were indicted on Wednesday in North Carolina for election fraud in the 2016 and 2018 elections.  They allegedly collected absentee ballots from voters and then taking steps to either throw them away, fill in votes for or alter the ballots in favor Republican candidates according to Wake County District Attorney Lorrin Freeman.

The indictment centers on the violation of North Carolina law that first doesn’t allow the collection by second parties, and requires two people to sign as witnesses when voters fill out absentee ballots. The indictment made public today alleges that in 2018, Dowless conspired with others to falsely sign as witnesses on ballots they had collected. The indictment also says Dowless mailed the ballots in such a way to make it appear the voters had mailed them or were just thrown away or destroyed.

During this past mid-term election Dowless was working on behalf of Republican Candidate for Congress Mark Harris who after all the counting was done appeared to win the election by 905 votes. However,  the State Board of Elections after almost three months and a recent 3-day hearing voted unanimously ordered a new contest last week, saying the race was improperly tainted by fraud. Harris after finally agreeing on a new election announced Tuesday he would not run in the make-up election.

The North Carolina indictment states Dowless ran this absentee ballot scheme in 2018, similar to one he ran in 2016 and instructed two of his employees to lie about both to state investigators.

Many North Carolina political observers are insisting that Dowless has been doing it for years and 2016 and 2018 are just his latest election fraud efforts. In 2016 The North Carolina State Board of Elections was informed about the election fraud Dowless allegedly committed, forwarded the evidence to federal and state prosecutors, but charges were not brought.

Kim Westbrook Strach, the executive director of the State Board of Elections, praised prosecutors Wednesday for bringing the charges said in a statement…

“These indictments should serve as a stern warning to anyone trying to defraud elections in North Carolina. Today is a new and better day for elections in our state.”