Rebel Yell: Update On Radius Health (RDUS) & How To Create Some Income On This Name 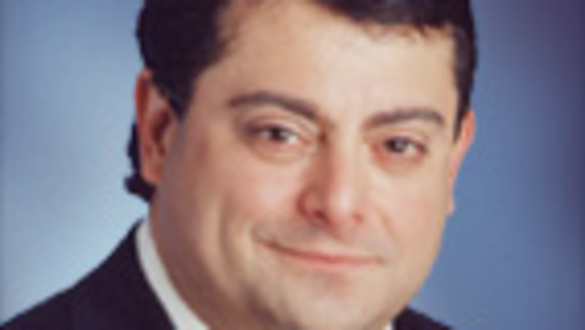 In a recent Rebel Yell I featured Radius Health, Inc. (RDUS) because of its breakthrough treatment for Osteoporosis that's under review for approval both by the FDA and the European Union. I wrote ...

"The Euro application was filed by the company in December and should be approved first. A approval could easily run its current shares from $40+ a share to $60+. An approval by the FDA would in my opinion send its share back over its historic highs of $80 a share. The company has recently engaged a firm specializing in patches to adapt its product to that delivery system. RDUS is not without risk. The European Union and FDA could find fault in the company's applications and send the stock into a nosedive. I don't think that will happen but it may make sense to buy underlying puts on any position in RDUS you might initiate as insurance."

I like call writing against positions and explained that I entered a position of 1000 shares at $39 a share in Radius Health, Inc. (RDUS) and sold 10 July 45 Call Options against the position at $0.50 a share that expired on July15th. I was betting RDUS would not rise and close over $45 a share on that Friday. I was right RDUS shares didn't climb over $45 a shares by the close of the market on expiration Friday.

I was able to reduce the cost of my shares by a little less than 50 cents a share. Since expiration my bullishness in RDUS has proven to be on target thanks to the ErlangerChartRoom.com trigger signals I use, including the Erlanger EC Spread. Despite a slight dip before the July expiration, RDUS now appears ready to climb back towards $50 a share. 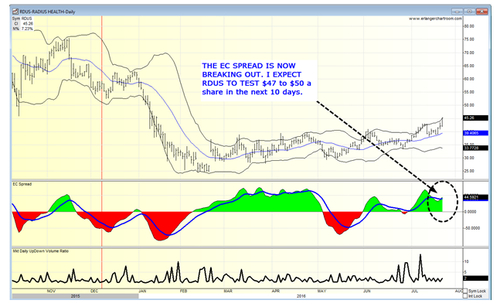 The EC Spread set up appears to be improving with RDUS climbing back and closing this past Friday, July 22, at $45.26 a share. Based on current EC Spread picture, I would be shocked if RDUS doesn't take a stab over $47 a share in the next few days.

I think the next few dollars of upside will create another generous call writing opportunity to lower your cost in every 100 shares of RDUS you may own. The August 19th $50 Call Options for RDUS are now trading at $0.65 by $1.55. If I'm correct and RDUS spikes to $47 or more you should be able to sell these August 19th $50 Call Options against your position and reduce your cost per share by $1.00 share or more.

While I'm bullish long term on RDUS and believe it could jump to $60+ a share in the next 60-90 days I have seen a pattern where earnings announcements have disappointed RDUS stock holders over and over again.

The fact is the company is still waiting for FDA and European Union approval for the firm's key Osteoporosis treatment. The money being spent on research, testing and administration is still going out and no real money is coming in yet. This has lead to disappointing earnings reports and sell off's in RDUS shares if only short term.
If that pattern holds we should see RDUS pull back under $45 a share after the company reports on August 4, 2016. This may make it possible to buy back any August $50 Call Options that you sell for $1.00 for less than a $0.50. That would net a reduction in the cost of your share of a little less than $1.00 a share if executed.

The gamble with this trade is the FDA or the European Union could potentially approve the firm's key Osteoporosis treatment before you're able to buy back the $50 August Call Options on a pull back. Your shares in RDUS could be at risk of being called way at $50 a share on August 19. 2016. Make no mistake if the FDA or the European Union approves RDUS treatment for Osteoporosis - it will send the stock well over $50 a share.