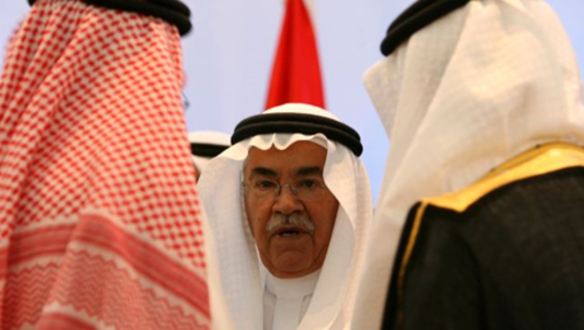 The International Energy Agency (IEA) reported this past Friday that the sharp decline in the price of oil the past 20 months is eroding the global surplus.

Bloomberg quoting a Paris based oil market adviser to 29 countries who reported in its monthly market report on Friday that there "... may be light at the end of what has been a long, dark tunnel" as market forces are "working their magic and higher-cost producers are cutting output." 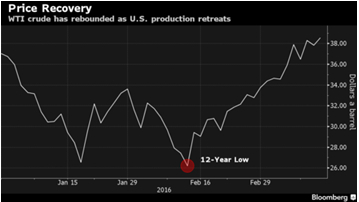 The price of oil has rallied 50% from the 12-year lows reached in the past month, primarily as a result of production declines of oil from U.S. shale producers.

Lower oil prices is reaping havoc on shale producers, oil service sectors and the financial solvency of country's including Venezuela, and Brazil. 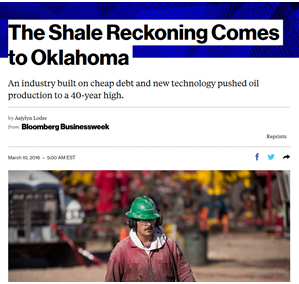 However the IEA cautioned that Saudi Arabia's a tentative deal with Russia to freeze oil exports at no higher than January's levels is unlikely to have a substantial impact on markets through the first half of this year.

The International Energy Agency reported that world oil consumption will increase by 1.2 million barrels a day, and that would reduce the global surplus from 1.7 million barrels a day through the first half of 2016 to 200,000 a day in the last six months of the year. This is a shift in opinion. The IEA last month had projected the second-half surplus in 2016 would be 300,000 a day. The agency cautioned again that lower demand could occur as oil prices rise curbs demand here in the United States. A pretty standard disclaimer the agency usually uses to qualify its predictions.

The IEA did not take in account the growing possibility of sudden oil output production interruptions from the financial fallout that could take place very rapidly.

" Investors are facing $19 billion in energy defaults as the worst oil crash in a generation leaves drillers struggling to stay afloat. The wave could begin within days if Energy XXI Ltd., SandRidge Energy Inc. and Goodrich Petroleum Corp. fail to reach agreements with creditors and shareholders. Those are three of at least eight oil and gas producers that have announced missed debt payments, triggering a countdown to default."

"Shale was a hot growth area and companies made the mistake of borrowing too much," said George Schultze, founder and chief investment officer of Schultze Asset Management in New York, which has been betting against several distressed energy companies. "It’s amazing that so many people were willing to lend them money. Many are going to file for bankruptcy, and bondholders and equity are going to get wiped out en masse."

The economic crisis in Venezuela is likely to take 250,000 barrels a day off the world market because the country already doesn't have the hard currency to pay for the import of chemicals needed to dilute its thicker oil production. The possibility of a more dramatic cut off in the production increases as the economic nightmare in the country worsens every day. 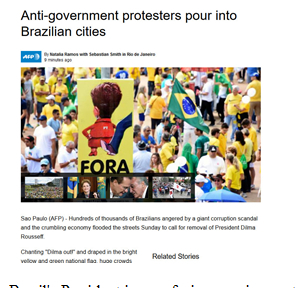 Brazil's President is now facing massive protests as a result of the economic crisis caused in large part by the big decline in the country's oil revenues. So while the Saudi "Oil Glut" Strategy worked to shut down North American shale production, it also threatens to bring down a few governments, literally collapsing the economies of a few countries.

It is my opinion that oil production is now on course to reach the point, if Russia, OPEC and Non OPEC state oil producers can negotiate a 1 million a day coordinated cut in exports at anytime the price of crude oil which closed slightly above $40 a barrel last Friday could drive the world price of oil above $50 a barrel.

We're at the tipping point in the oil market. Pullbacks in the price of oil should be used to take positions in key North American producers. A jump in oil prices to the $45 - $55 range will not be enough to re-ignite shale production or resurgence of deep water oil production for countries like Brazil or Columbia.

For specific trade recommendation consider subscribing to Gold and Energy Advisor. We will be making specific low risk, high reward recommendations on pullbacks in the price of oil. We have a technique /strategy that will allow our subscribers to rack up really healthy profits that at the same time limit downside risk.