Rebel Yell: Is Donald Trump at Risk For Being Assassinated?

It's impossible to ignore.

Just days ago, Trump referred to Senator Warren of Massachusetts as "that Indian" in a swipe at her heritage. Perhaps sensing his racism, American Indian South Carolina Governor Nikki Haley threw her support to Marco Rubio.

Donald Trump has even raised the ire of the international drug lord El Chapo who has shown a remarkable ability to have his enemies killed -- even while he has been under lock and key in a number of different prison cells. 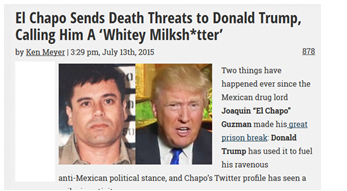 Trump's approval rating nationally is just 27% despite the growing likelihood of his securing the 2016 Republican Nomination for President. 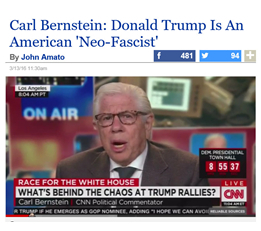 Trump's steady fanning of violence has been compared to the hate filled rants of George Wallace. Trump is completely aware of the danger. He was the first 2016 candidate to ask for and receive Secret Service protection. It's no wonder Trump wears a bullet proof vest at all times... Trump has been already been receiving death threats. His son Eric Trump and his sister, a Federal Judge, have also received threatening letters warning that unless Donald J. Trump withdraws from the Presidential race, the business mogul’s children will be harmed. 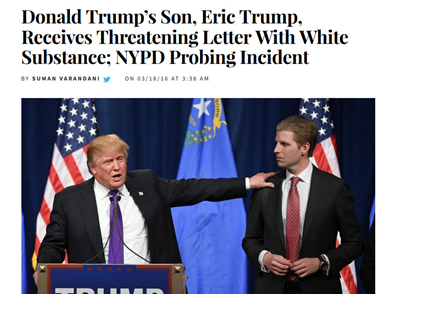 Trump's angry vitriol at protesters and justification of assaults by his supporters for protesters signs, unpleasant gestures, and or angry words further adds to a dangerous equation that could foster an assassination attempt. 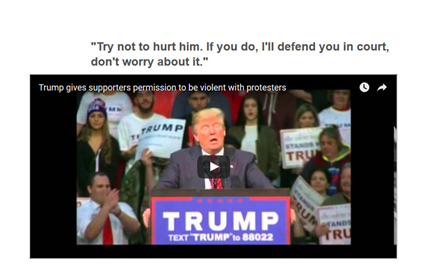 Think about it. He has justified the assaults on protesters for just giving him the finger or having a t-Shirt he finds offensive. Is it hard to imagine one of his most virulent haters to use the same logic to fire a bullet at his forehead?
Trump's detractors and political enemies include main stream moderate and conservative Republicans who are openly calling him a con-man, a carnival barker, snake oil salesman, demigod, fascist, white supremacist, and a threat to the U.S. democracy.

More than one potential assassin could be refining his or her aim on a shooting range...assembling remote control bombs, preparing a radioactive food additive or preparing killer drones - right now.

Five Saudi Arabian nationals were detained by Lebanon’s intelligence services after searching their private jet, a “heavily encrypted” laptop was found. The laptop contained Donald Trump's confidential travel and private security plans. The assassin doesn't have to be a middle-east terrorist or a Mexican drug cartel hit man, a vengeful immigrant, or perhaps even a mentally ill nut who is just looking to impress a Hollywood movie star.

There's also the chance that a patriot could emerge as Trump's assassin -- a U.S. veteran who honestly believes Trump is a modern day Hitler in the making. In Stephen King's novel Dead Zone, the potential assassin was a school teacher.
Ironically, for Donald Trump, the man who pushed the Obama "birther" conspiracy long after anyone credible gave up on that nonsense conspiracy ... there's the danger of a bigger conspiracy to take his life.

Trump has managed to alienate scores of mega-wealthy Wall Street insiders - some much wealthier than him, capable of arranging his neutralization. The danger of assassination is so serious, even the Russians have warned Trump. One news report early in the primary season last year revealed... 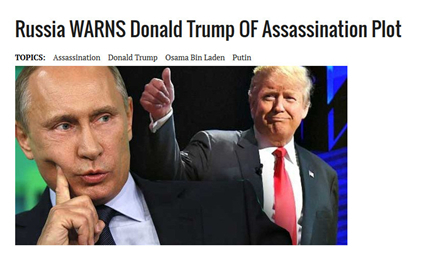 "A Russian Foreign Intelligence report ... warned there is an active plot to assassinate Presidential candidate Donald Trump, [because] he poses a serious threat to the status quo in the ruling elite in America and has been deemed unlikely to tow the line.”

The Meyer Lansky character in Godfather II said that no one is out of reach. Anyone can be gotten to, later only to be shot in a Miami airport returning to the United States. Is Trump safe from his own fascist rhetoric or will he fall victim to it like Mussolini?

Trump may find Mussolini's quotes interesting, but he shouldn't forget that the Italian dictator wound up hung upside down in a public square next to his girlfriend drenched in urine to the cheers of many who were earlier his buoyant supporters… a common end for many fascists throughout history.