Putin's Lies Fake Out His Own Military 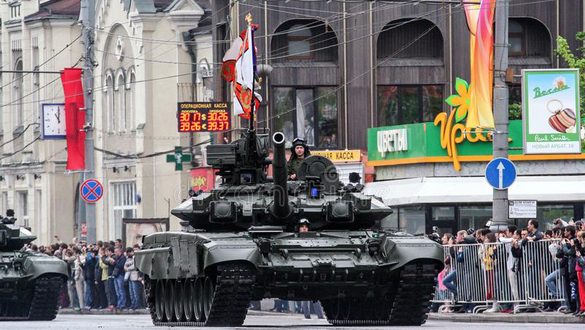 According to Putin's dream, Russia's invading army would be welcomed in Ukraine. The combat plan was designed as a victory parade. It assumed no effective military opposition and a warm welcome from the Ukrainian population. These expectations proved to be unfounded.

'I think, pretty much, everybody outside of his very closed circle around Putin knows that this campaign is going down the drain... We have received reports that soldiers from Crimea are refusing to be deployed to Odessa, to fight for Odessa. They see the warships approach the coast and suddenly stop and turned away…

"We, in Ukraine, were clueless what was happening. Then it turns out, when they realize why they were sent, refused to," he added. "So if even Russian soldiers are refusing to get involved, why would China want to get involved with this campaign? "The [Ukrainian] soldiers are ready to fight until the last drop of blood here and Russian soldiers increasingly are clueless about what they're doing here." ” — Olexander Scherba, Ukrainian diplomat

Putin Fell Victim to His Own Propaganda

Three weeks into Vladimir Putin's invasion of Ukraine, the fighting has not gone according to plan. What went wrong from the Russian perspective? A lot.

When you analyze the results on the battlefield, it is evident that Putin's lies not only beguiled Tucker Carlson (and other successors to the group who endeared themselves to Stalin as "useful idiots"). More seriously, from Putin's perspective, his invasion has been derailed by the toxic effects of his propaganda on Russia's own military.

The problems began with the general staff. Their war plans for the invasion of Ukraine fell far short of optimizing the advantages that Russia's military holds as a much larger force than that of Ukraine. And Russia operates its armed forces on a budget a magnitude (10 times greater than that of Ukraine).

The generals evidently believed Putin's fantasy that Russia's invasion force would be welcomed in Ukraine. The battle plan was conceived almost as a version of a victory parade. It presumed little effective resistance from the Ukrainian military and a warm reception from Ukrainian civilians. These expectations proved to be remote from the facts.

Having planned for a "victory parade," the Russian armed forces found themselves unable to execute a rapid pivot in strategy.

A big part of the problem is that the contingents of the Russian army that were deployed to invade Ukraine did not comprise coherent command units — Battalion Tactical Groups or BTGs.

A BTG is a Russian battlegroup that operates independently as a self-contained military unit with tanks. A BTG typically has one tank company of ten tanks, along with three infantry companies. One would be a company with ten BMP-tracked infantry vehicles and two with ten BTR wheeled armored personnel carriers each. In addition, the Battalion Tactical Groups are usually assisted by one platoon of three vehicles armed with automatic grenade launchers and another support platoon with five anti-tank vehicles.

The BTGs are designed to operate coherently and effectively. But the Russian invasion forces were not deployed to Ukraine as organized BTGs. On the contrary, small detachments extracted from different BTGs were deployed along the Ukrainian border.

The quasi-randomly assembled tank forces improvised various tactics that tended to leave them stranded. These random elements had no experience of working together. They did not know what to do as the tank columns motored into Ukraine and encountered unexpectedly stiff resistance, including even sorties from the Ukrainian air force.

Even Russian forces who did succeed in advancing into Ukraine soon outran their logistics support. Tanks ran out of fuel and were abandoned by their crews to avoid becoming "sitting ducks" for Ukrainians firing shoulder-launched Javelin anti-tank missiles.

An open-source site,  Oryx, has been keeping track of the vehicles, planes, and other equipment that Russian or Ukrainian forces have destroyed or taken, based on available images. Their count stood at 204 tanks and 406 other armored vehicles for a total of 610 lost as of March 14.

The Ukrainian government claims it has inflicted even more significant losses. Their figure is 374 tanks and 1,226 other armored combat vehicles as of March 14. This would give a total of 1,600.

I would be surprised if Ukraine's tally of Russian armored combat vehicles destroyed is more accurate than that of Oryx.

Of course, I would believe Ukrainian information before anything coming from the Kremlin. The Wall Street Journal reported, "Ukraine Has Become a Graveyard for Russian Tanks." Even lowball estimates of Russian armored combat vehicle losses in Ukraine, which are tacitly confirmed by video evidence broadcast by independent news sites, like Al Jazeera, suggest that Russian losses have been substantial.

Unlike previous wars, almost every soldier in Kuwait is a potential media influencer. They all have smartphones with photo and video capacities. When Ukrainian troops blow up a Russian tank, they capture the event on smartphones and spread the images around the globe. Undoubtedly, some Russian soldiers are recording embarrassing scenes from Ukraine's battlefields and sending those images home.

Those losses are running far ahead of those the Soviet Union suffered during nine years of occupation of Afghanistan. During that entire nine-year occupation, the Soviets lost 147 tanks and 1,314 other vehicles, a total of less than 1,500, before they had to withdraw.

Equally, Russian casualties now are running far ahead of the pace of Soviet casualties in Afghanistan. Moscow has officially put the number of its soldiers killed and injured during the first week of fighting at about 500 and 1,600.

Ukraine claims to have killed many more Russians than acknowledged in official Russian tallies. According to Kyiv, 12,000 Russians have died, while 1.300 Ukrainian troops have lost their lives. The Russian losses are more than the U.S. lost in a decade in Iraq and over 20 years in Afghanistan.

These figures far exceed the Soviet loss of about 28 troops on average per week during their occupation of Afghanistan.

The New York Times reports that a conservative estimate from U.S. intelligence sources suggests that 6,000 Russian military personnel have died in Ukraine. Among the dead are known to be three senior, Major Generals, and other high-ranking officers, generals, and colonels identified by name in news reports.

Going back to how Putin's lies have faked out his own military, it wasn't merely a case that the Russian command concocted a hapless battle plan for the invasion of Ukraine. Their strategy proved shockingly inept in the early going.

It is also evident that Putin's lies played an informing role in demoralizing Russian troops. Interviews with Russian prisoners of war make clear that they were bewildered when ordered to invade Ukraine. They had been repeatedly told that they were going on operations and would not invade.

Consequently, it is hardly surprising that there are widespread credible reports of Russian troops refusing to fight, as suggested in Olexander Scherba's account. Some have reportedly abandoned their equipment and walked back to Russia.

That said, the Russian military remains powerful and has yet to bring its air power to bear. The Russians have been committed to an irrational use of force to date. I expect a pivot in strategy that has already been in evidence rather than sending troops into large urban areas where they will face the dangers of urban guerrilla warfare.

In this case, I think the Russians will continue to bombard civilian structures and kill many Ukrainian citizens after the Russians deploy their best Battalion Tactical Groups in an attack on Kyiv. If that fails, I suspect Putin's regime could be on the way out. And a negotiated ceasefire.

My years spent researching financial crises have also taught me that hard-working people usually suffer the most... The savers... the taxpayers... the people who "follow the rules" are the ones who bear the brunt of the consequences. Sign up for my newsletter, Strategic Investment, and stay in the loop.