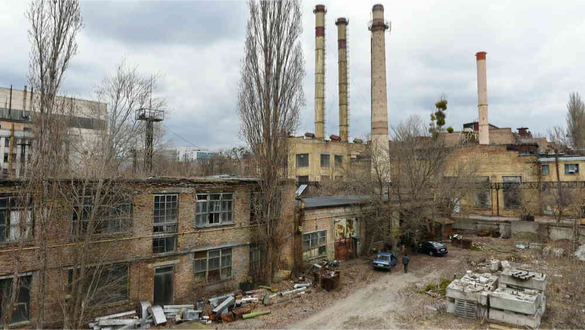 Factories and infrastructure throughout Russia are rotting and crumbling while Putin has stolen estimated $70 to $100 billion from his country.

When the heating was switched off in the middle of winter, workers at a factory in central Russia knew things were terrible. Most of the building’s windows were broken, and the temperature was freezing -- 15°C. Things have steadily gone from bad to worse at Ormeto-YUMZ’s factory located in Orsk. The machinery factory has been closed since September, and the closure might be permanent. The salaries of 3,000 workers have not been paid in a while and management, lenders and banks are arguing over the company’s debt. One of the workers complained that the company did not care about them and explained that there was nothing left - no materials, no money, and no customers.

Once a symbol of Russia’s industrial power, the factory was a linchpin that manufactured machinery for plants across Russia and in 30 countries globally. Now it serves as an example of the rot in the Russian economy with an estimated worth of $1.7tn. The economy has been crippled by Western sanctions squeezing its banking sector, wide-scale state ownership, long-delayed reforms, and chronic under-investment. If one looks past Moscow’s glistening granite pavements, Bentley showrooms, and Michelin-starred restaurants, the regional industrial belt is besieged.

The Russian GDP growth of around 1.7% that is expected this year would be even worse if it weren’t for strong gas and oil revenues. This suggests that other economic sectors are in retreat or stagnant. The Kremlin’s fear of inciting public unrest has resulted in tough restructuring decisions often being avoided and stop-gap measures implemented by state-owned banks in an attempt to support failing businesses. This has led to an official unemployment rate of 4.7% which is close to a historic low, while real wage cuts have been very deep. Disposable income has been decreasing steadily since 2014 and was 11% lower in 2017 when compared with four years before that.

Apurva Sanghi, an economist at the World Bank, explains that the expected modest GDP growth in Russia is caused by more significant problems in the country’s real economy with the declining and low potential growth being the binding constraint. Levied in the aftermath of the 2014 seizure of Crimea, Western sanctions against Moscow have failed to paralyze Russia as much as supporters had hoped due to strong crude prices. More than four years of economic restraints have however taken their toll on parts of the economy. Under President Vladimir Putin’s 18-year rule, failure by successive governments to enforce required economic reforms have left companies such as the 76-year-old Orsk plant on the edge of disaster.

During WW II, the factory was moved from Ukraine to the southern Urals to safeguard the USSR’s manufacturing resources. It manufactured equipment for mines, steel mills, and foundries across Russia, Europe, and Asia. When it was taken into private ownership after the Soviet Union collapsed, the factory’s workforce decreased from 12,000 some 15 years ago to only 3,000. That was when workers were told not to return to work the next day. The plant has an unpaid heating and electricity bill of Rbs1.3bn ($20m) according to employees, and the state-controlled lenders are no longer willing to increase its credit line.

Vladimir Gudomarov, the head of the Russian Communist party’s Orsk branch, noted that only people in the oil industry in Russia think that everything is ok. He added that the authorities only suppress and oppress the public’s anger, and are only interested in their welfare.

Although investment is still going to Siberian petrochemical plants and Russian Arctic gas projects, other industrial plants in Russia have in recent months announced impending layoffs. According to state statistics, employers in Russia owed their employees a total of Rbs3.2bn ($48m) in unpaid wages as at the end of November.

When the Financial Times paid a visit to the Orsk facility earlier this month, only 2 of its 13 towers were active, and hundreds of train carriages were idle on their tracks. Although the regional governor promised that the facility would reopen on December 3, workers are not convinced and believe they are being shut down bit by bit.

The factory’s management was not available for comment, and employees at the factory’s entrance claimed they had been told not to speak to the FT. Orsk has lived through similar catastrophes before, as has many other regional towns with enterprises from the Soviet era. Although politicians keep on promises that other plants will be kept running, job losses at 30 factories in the city amounted to more than 50,000 over the past twenty years. An almost deserted shopping center was formerly a confectionery factory, and loan companies and pawn shops can be found all along the main street.

A former employee of the Orsk factory believes that those at the top don’t care and they determine the policies and through that, the attitudes of people. He added that the government is no longer investing for the future, but only care about surviving today.

These attitudes are challenging Mr. Putin, and his popularity ratings had decreased sharply since this autumn when he increased the official retirement age. Levada Centre, an independent Russian pollster, held a poll this month that showed 61% of Russians believe Putin is responsible for Russia’s problems.

Although the Kremlin has maintained strong diplomatic ties with countries such as Saudi Arabia, India, and China, and this has enabled them to retain some global clout despite sanctions, it will be much harder to conceal domestic anger over livelihoods and jobs.

An individual whose family worked for the Orsk Company for generations noted that a feeling of the crisis was prevalent across the city with there being no money, no jobs and therefore no hope. He added that having 3,000 angry people in the town creates a potentially dangerous situation for the authorities.