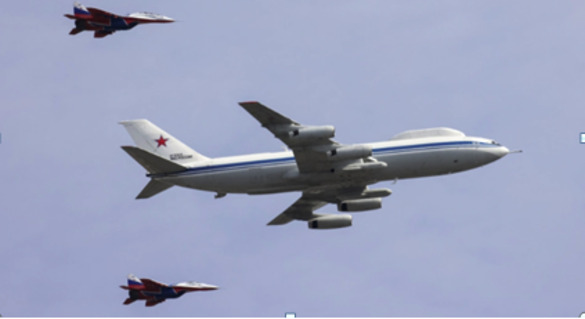 According to a Chinese news website, the Ilyushin II-80, also known as Russia's Doomsday plane, is expected to appear during the Victory Parade, which will take place on May 9. The plane was recently spotted during the parade's practice run.

Russia commemorates the victory of World War II with a military parade in Moscow's Red Square on May 9, which is known as the Great Patriotic War. In commemoration of the Red Army's victory over Nazi Germany during World War II on the Eastern Front, the Victory Parade is held every year on May 1. This year's rehearsal, which commemorated the 77th anniversary of the event, included 11,000 participants, 131 different types of weapons, and 77 aircraft, including the Doomsday plane, among others.

Russia is the only country, other than the United States, that possesses a doomsday plane, an airborne command and control aircraft capable of keeping important military officials and heads of state safe in a nuclear attack on the country.

The Russian plane, which has been in service for more than three decades, has only been seen a handful of times. They were so insignificant that it took five years to get their first photograph after their first flight.

Even after that, sightings of aircraft have remained rare, except for one that was reported during an air show. According to the news site, the plane was recently spotted during a practice flight, where it was flanked by two MiG-29 fighter jets.

The plane was supposed to be part of a 77-strong flypast over Red Square as part of the Victory Day parade, but it was canceled due to bad weather, despite clear skies over Moscow.

Several other Victory Day flypasts across Russia have now been reported to have been canceled as a result of the poor weather conditions.

Questions have now been raised about the true motivation behind the emission of such a significant portion of the traditional part of the annual Victory Day celebrations.

An anonymous Russian military analyst told the New York Times that "there cannot be hurricanes all across the country" and that "bad weather" as an explanation "doesn't look plausible."

According to Russian tyrant Vladimir Putin, the Doomsday plane was scheduled to take part in the annual Victory Day military parade on Red Square commemorating the defeat of Nazi Germany, which would have taken place on November 11.

Russia has traditionally used the parade to demonstrate its military might, with tanks, nuclear missiles, and other heavy equipment rumbling through Red Square and fighter planes flying overhead.

The annual event also sees tens of thousands of Russian soldiers march past Putin and his senior officers.

According to reports, in Moscow, a planned flypast of the Doomsday plane was abruptly canceled at the last minute, ostensibly due to inclement weather.

However, during the parade, a clear blue sky and sun were visible in Moscow, leaving observers perplexed as to what was going on.

Putin has frequently played God during the past two decades, ordering planes to spray early morning clouds with a chemical cocktail to keep rain from falling on his parade.

However, it appears that the technology from the Soviet era is no longer in use.

And the mystery was exacerbated when it was revealed that the Moscow flyover was only one of ten Victory Day military air shows that had been canceled across Russia.

It has been speculated that this was due to security concerns and the fear of terrorist attacks on airplanes.

The plane had made an appearance during the parade's rehearsals, but it did not appear on the actual parade day.

The windowless Il-80 is one of four so-called Doomsday planes designed to act as a flying Kremlin in a nuclear attack on the Russian Federation.

Russian President Vladimir Putin would be able to rule the country and issue orders to his military, including ordering nuclear strikes from an airborne command post.

The Boeing E-4B planes, which are based on the 747 airliners, are the equivalent in the United States.

It was targeted by a daring band of thieves in 2020, resulting in an embarrassment for the crew and a significant breach of security for the company.

According to reports from Moscow, a cargo hatch was breached, resulting in the theft of 39 pieces of radio equipment.

According to reports, the equipment contained gold and platinum, which is thought to be a possible motive for the theft.

It comes as Putin's victory parade was humiliatingly hacked, with a message telling Russians they had Ukrainian blood on their hands being displayed on the screen.

It was discovered that the hack had affected online viewers of various channels broadcast by the MTS mobile operator and NTV Plus, Rostelecom, and Wink.

Several captions appeared on the screens, reading: "You are responsible for the blood of thousands of Ukrainians and hundreds of their children." The media and the authorities both lie. "No to going to war."

During a parade in Kyiv, Russian dictator Vladimir Putin claimed that the war in Ukraine was necessary because the West was "preparing for an invasion of our land, including Crimea."

However, the widely anticipated declaration of all-out war on Ukraine has remained on the drawing board.

The Soviet Union's victory over Nazi Germany has traditionally been celebrated as a national holiday, during which the 27 million people who died during the war are remembered and honored.

Putin had hoped for a quick victory in the Ukraine war to be able to celebrate today with his supporters.

However, the stumbling invasion has met with fierce resistance, with thousands of Russian soldiers killed and vast amounts of military equipment destroyed by the valiant Ukrainian soldiers.

Instead, he was confronted with Russian television broadcasts and an anti-war message that could be seen throughout the entire country.

The hack also targeted the Russian defense ministry's TV Zvezda channel, which viewers who accessed it through the Yandex search engine could see.

In Siberia, MTS reported that "a cyberattack was carried out on Russian TV broadcasting channels, resulting in which subscribers may have extremist inscriptions in the broadcast grid."

"Right now, our IT specialists are working to mitigate the effects of the hack as quickly as possible, allowing subscribers to receive services and watch television programs and movies as soon as possible."