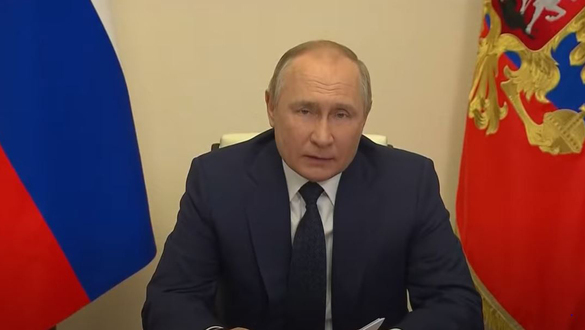 The world is one step closer to witnessing the murder of hundreds of thousands of people by using a strategic nuclear weapon in Ukraine. Putin could be on the verge of pulling the nuclear trigger to blackmail the world into surrounding Ukraine to Russia.

The world is about to become significantly more dangerous. On Monday, Victory Day, Russia's most patriotic and solemn holiday, will be observed.

A steady stream of respected Vladimir Putin experts has warned that the Russian dictator will declare war on Ukraine on Monday and order a mass mobilization of 500,000 new Russian military recruits. Before anyone concludes that a half-million, even 200,000 new Russian military recruits will reverse Russia's devastating losses in Ukraine, it should be remembered that training these recruits will take 3-6 months. The loss of 25,000 Russian soldiers and the wounding of 45,000 have severely harmed Russia's ability to wage a ground war.

Russia's offensive and defensive capabilities have been severely weakened by the loss of over 1,000 tanks and thousands of military transports and its ability to replace thousands of missiles and heavy ordinances. Russia's military might have been severely weakened even before the U.S., and NATO has supplied tens of billions of dollars in heavy offensive weaponry for all intense purposes.

According to experts, Putin's mental health may have been harmed by cancer treatments, as his special military operation appears to be collapsing in a wave of failures that has devastated Russian military morale.

The sinking of Russia's Black Sea flagship, a guided-missile cruiser with 510 crew members, on April 14 after being hit by two Ukrainian Neptune anti-ship missiles was devastating. It was reportedly hit by a Ukrainian missile battery and is currently on fire after being struck by one or more Neptune anti-ship missiles. Still, Ukraine has now crippled a second Black Sea flagship, the Admiral Makarov, and an Admiral Grigorovich-class frigate.

If this is confirmed, Russia may be down to three major surface combatants following the loss of the missile frigate Admiral Makarov. This could lead to Putin declaring war on Monday during his Victory Day speech.

According to many who study and watch Putin, the Russian military's poor physical and emotional condition and its severely hampered ability to wage war could have cancer-stricken Putin feeling paranoid and threatened. In that case, he could order the use of a strategic nuclear weapon to signal to the rest of the world that he is willing to kill every last Ukrainian to win his war.

Putin's choice of Gen. Alexander Dvornikov to lead the country's operations in Ukraine sent a chilling message. Dvornikov oversaw Russian troops in Syria and had a history of targeting civilians, raising concerns among officials that the invasion of Ukraine could worsen as he is expected to renew the assault in Ukraine's Donbas region.

Dvornikov is known as the Butcher of Syria, where he demonstrated a disregard for innocent lives lost. He's also unlikely to reject or refuse to use a tactical nuclear weapon in Ukraine if Putin orders it.

The United States and NATO are not likely to react to Russia using a nuclear weapon by entering the Ukraine war. However, it will lead to the Biden Administration declaring Russia a "sponsor of terrorism" and being about the most intensive sanctions and blockade of a country in human history.

Countries determined by the U.S. Secretary of State to have repeatedly provided support for acts of international terrorism are designated pursuant to three laws: section1754(c) of the National Defense Authorization Act for Fiscal Year 2019, section 40 of the Arms Export Control Act, and section 620A of the Foreign Assistance Act of 1961). The four main categories of sanctions resulting from designation under these authorities include restrictions on U.S. foreign assistance; a ban on defense exports and sales; certain controls over exports of dual-use items; and miscellaneous financial and other restrictions.

Designation under the above-referenced authorities also implicates other sanctions laws that penalize persons and countries engaging in certain trade with state sponsors. Currently, four countries are designated under these authorities: Cuba, the Democratic People's Republic of Korea (North Korea), Iran, and Syria.

The consequences of making it illegal for any country to buy, sell or trade with Russia will be seen immediately in the world's financial markets.

On Friday, I recommended in my online investment newsletter service WorldOpportunityInvestor.com that investors, in anticipation of the danger of Putin declaring war on Ukraine on Monday and approaching the use of a strategic nuclear weapon, immediately add to the number of shares of Occidental Petroleum Corporation (NYSE: OXY) and Cheniere Energy, Inc (NYSE: LNG).

Russia has reiterated its claims in recent days that the U.S. is preparing "provocations" to accuse Moscow of using weapons of mass destruction (WMD). The United States, Great Britain, and Ukraine have warned that Russia is preparing to "fabricate a pretext for using chemical or strategic nuclear weapons" by claiming a fake chemical attack by Ukraine. Putin has made a career of false-flag attacks since he became the President of Russia.

If I see any indication that Putin is being humiliated in the coming weeks via Russian military losses, I will recommend buying PUT options in the S&P and BitCoin. The use of a nuclear weapon would result in the same plummet or worse in the days following September 11, 2001.

Putin could make a declaration of war on Ukraine Monday