Protecting the Planet from Undetected Asteroids 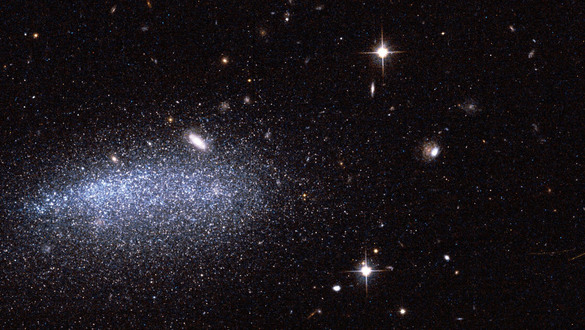 Scientists have developed an algorithm that can scan historical astronomical photographs for previously unseen space pebbles, which could one day pose a threat to our planet.

The B612 Foundation, a nonprofit organization, founded by Dr. Lu, a former NASA astronaut with a doctorate in applied physics, announced the discovery of more than 100 asteroids on Tuesday. That is unremarkable in and of itself. Skywatchers all over the world are constantly reporting new asteroids. This includes amateurs with backyard telescopes and robotic surveys that systematically scan the night skies.

What is remarkable about B612 is that it did not construct a new telescope or even make new observations using existing telescopes. Instead, researchers funded by B612 used cutting-edge computational power to sift asteroids out of the 68 billion dots of cosmic light captured in the images, 412,000 of which were in the digital archives at the National Optical-Infrared Astronomy Research Laboratory, or NOIRLab.

The research contributes to NASA's and other organizations' global "planetary defense" efforts.

Only about 40% of the estimated 25,000 near-Earth asteroids larger than 460 feet in diameter have been discovered. The remaining 60% — approximately 15,000 space rocks, each capable of unleashing the energy equivalent to hundreds of millions of tons of TNT in a collision with Earth — are undiscovered.

B612 worked with Joachim Moeyens, a graduate student at the University of Washington, and his doctoral adviser, astronomy professor Mario Juric. They and colleagues at the university's Institute for Data-Intensive Research in Astrophysics and Cosmology created an algorithm that can examine astronomical imagery to identify asteroids and determine which dots of light in images taken on different images nights are the same asteroid.

In essence, the researchers devised a method for discovering what has already been observed but has gone unnoticed.

A swath of the night sky is littered with thousands of points of light. The arrangement of distant stars and galaxies remains unchanged. However, much closer objects within the solar system move quickly, and their positions change overnight. Asteroids are typically discovered when the same part of the sky is photographed multiple times in a single night.

A "tracklet" is a series of observations of a single moving object made during a single night by astronomers. A tracklet indicates the object's motion, directing astronomers to where they should look for it on another night. They can also look for the same object in older images.

Many astronomical observations that are not part of systematic asteroid searches inevitably record asteroids, but only at a single time and location, rather than the multiple observations required to create tracklets.

The NOIRLab images, for example, were primarily captured by the Chilean Victor M. Blanco 4-Meter Telescope as part of a survey of nearly one-eighth of the night sky to map the distribution of galaxies in the universe.

The extra specks of light were ignored because they were not relevant to the astronomers' research. "It's just random data in random images of the sky," Dr. Lu explained.

On the other hand, Mr. Moeyens and Dr. Juric see a single point of light that isn't a star or a galaxy as a starting point for their algorithm, Tracklet-less Heliocentric Orbit Recovery, or THOR.

The law of gravity precisely governs the motion of an asteroid. THOR creates a test orbit that corresponds to the observed point of light, assuming a certain distance and velocity. It then computes the asteroid's position on subsequent and previous nights. If a light point appears in the data, it may be the same asteroid. If the algorithm can connect five or six observations over the course of a few weeks, that is a promising candidate for asteroid discovery.

In theory, there are an infinite number of test orbits to investigate, but doing so would take an impractical eternity to calculate. Because asteroids are clustered around specific orbits, the algorithm only needs to consider a few thousand carefully selected options.

Nonetheless, calculating thousands of test orbits for thousands of potential asteroids is a massive numerical task. However, the advent of cloud computing — massive computational power and data storage distributed across the internet — has made this possible. Google contributed time to the effort via its Google Cloud platform.

THOR generated 1,354 possible asteroids. Many of them were already in the International Astronomical Union's Minor Planet Center's catalog of asteroids. Some had previously been observed, but only for one night, and the tracklet was insufficient to determine an orbit confidently. So far, the scientists have sifted through roughly one-eighth of the data from the NOIRLab archives for a single month, September 2013.

So far, the Minor Planet Center has confirmed 104 new discoveries. The NOIRLab archive contains seven years of data, implying that tens of thousands of asteroids are out there waiting to be discovered.

"I think it's fantastic," said Matthew Payne, director of the Minor Planet Center, who was not involved in the creation of THOR. "I think it's very interesting, and it also allows us to make good use of existing archival data."

The algorithm is currently set to find only main-belt asteroids, those with orbits between Mars and Jupiter, rather than near-Earth asteroids, which could collide with our planet. Near-Earth asteroids are more challenging to identify because they move faster. Different observations of the same asteroid can be separated in time and space, requiring the algorithm to perform more number crunching to connect them.

THOR is capable of not only discovering new asteroids in old data but also of transforming future observations. Consider the Vera C. Rubin Observatory, formerly known as the Large Synoptic Survey Telescope, currently being built in Chile.

The Rubin Observatory, funded by the National Science Foundation, is an 8.4-meter telescope that will scan the night sky repeatedly to see how it changes over time.

The observatory's mission includes studying the universe's large-scale structure and detecting distant exploding stars known as supernovas. It will also see a slew of smaller-than-a-planet bodies whizzing around the solar system.

Several years ago, some scientists proposed that the Rubin telescope's observing patterns be changed so that it could identify more asteroid tracklets and thus locate more dangerous, as-yet-undiscovered asteroids faster. However, this change would have slowed other astronomical research.

If the THOR algorithm works well with the Rubin data, the telescope will no longer need to scan the same part of the sky twice a night, allowing it to cover twice as much ground.

If the telescope could return to the exact location in the sky every two nights rather than every four, it could help with other research, such as the search for supernovas.

"That would be another effect of the algorithm that has nothing to do with asteroids," Dr. Ivezic explained. "This shows how the landscape is changing nicely." The scientific ecosystem is changing because software can now do things that 20-30 years ago you would not even dream of, let alone consider."

Dr. Lu sees THOR as a new way to achieve the same goals he had a decade ago.

B612 had its sights set on a far more ambitious and costly project at the time. Sentinel, a nonprofit organization, planned to build, launch, and operate its own space telescope.

Dr. Lu and the other B612 leaders were frustrated at the time by the slow pace of the search for dangerous space rocks. Congress mandated NASA in 2005 to locate and track 90% of near-Earth asteroids with diameters of 460 feet or greater by 2020. However, lawmakers never provided NASA with the funds required to complete the task, and the deadline passed with less than half of the asteroids discovered.

It was difficult for B612 to raise $450 million from private donors to fund Sentinel, especially since NASA was considering its own asteroid-finding space telescope.

When the National Science Foundation approved the Rubin Observatory, B612 reconsidered its plans. "We could quickly pivot and ask, 'What's a different approach to solving the problem for which we exist?'" Dr. Lu stated.

The Rubin Observatory will begin testing in about a year and will be operational in about two years. Dr. Ivezic believes that ten years of Rubin observations, combined with other asteroid searches, could finally meet Congress's 90 percent goal.

NASA is also stepping up its planetary defense efforts. Its NEO Surveyor asteroid telescope is in the preliminary design stage, with a launch date of 2026 planned.

Later this year, its Double Asteroid Redirection Test mission will slam a projectile into a small asteroid and measure how much the asteroid's trajectory changes as a result. China's national space agency is working on a similar task.

Instead of wrangling a telescope project worth nearly $500 million, B612 can contribute to less expensive research projects like THOR. It announced last week that it had received $1.3 million in gifts to fund additional work on cloud-based computational tools for asteroid science. Tito's Handmade Vodka has also given the foundation a grant that will match up to $1 million in contributions from other donors.