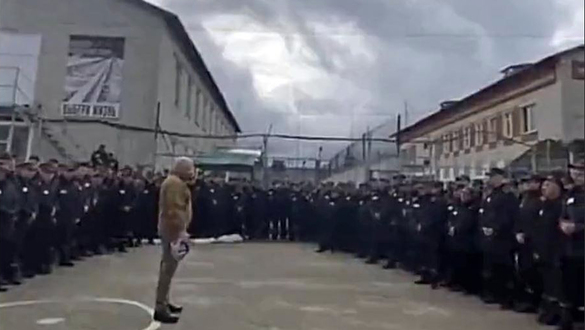 The paramilitary Wagner Group made up of Russian convicts has assisted Moscow in gaining land in Ukraine as the understaffed Russian soldiers are experiencing defeats in Ukraine. Russia Pardons the First Mercenary Convicts Recruits to Fight in Ukraine.

Ned Price, a spokesperson for the State Department, called the practice of recruiting convicted felons for war in return for freedom if they are prepared to fight a "barbaric tactic."

State media in Russia claimed on Thursday that the leader of the paramilitary Wagner Set announced that the first group of inmates it recruited to fight in Ukraine had finished their duty and been pardoned. Human rights organizations have argued that this shows how the Kremlin uses inmates illegally to rebuild its dwindling military.

The Wagner Group is the biggest mercenary organization in Russia, and its director, Yevgeny Prigozhin, was recently seen on camera by the Russian official news agency RIA thanking approximately a dozen soldiers on the successful completion of their military contracts. In a different section of the film, Mr. Prigozhin says that a certain set of ex-convicts are now free.

The United States issued a condemnation of the Russian mercenary group Wagner for its release of mercenaries recruited from prisons who had completed their contract with the private military company. This occurred at the same time that Wagner was reportedly seeking to enlist more convicts from Chechen jails.

Mr. Prigozhin is seen addressing the first set of men, "You have accomplished your contract with dignity." He then addresses another group, warning them to "not get too drunk, not go too high, and not rape women."

One of the soldiers seems to be saying, "We will come back to complete what we began," in allusion to the Ukrainian conflict.

Mr. Prigozhin said that all those who were granted amnesty would get medals and amnesty papers within "two, three days" in another video from the same incident that was shared on social media.

Prigozhin said that the twenty detainees who turned into fighters were just persons who had been unable to find their place in society "by accident or by force of character" and who ultimately ended up getting into trouble as a result of this inability. He went on to say that society "gave these people a chance and should be grateful." since society "

It is unclear what legal procedure was used to liberate the men, according to Russia Behind Bars, the country's primary prisoner rights group. This is just one more legal infringement, they argue, in Mr. Prigozhin's campaign to recruit inmates to fight with Moscow's soldiers in Ukraine.

According to the Russian Constitution, a pardon may only be granted by the President. Mr. Prigozhin's assertion is unsubstantiated, and the Kremlin's press office did not immediately reply to a request for comment.

On Thursday, Russian state media reported that Wagner Group declared the organization's first dispatch of detainees it recruited to fight in Ukraine had completed their mission and been pardoned. According to human rights groups, this is evidence that the Kremlin is using detainees unlawfully to bolster its depleting armed forces.

Wagner Group head Yevgeny Prigozhin was recently filmed by the Russian state news agency RIA congratulating a group of around a dozen servicemen on the end of their military contracts. Mr. Prigozhin announces that a group of formerly incarcerated individuals are now free in a separate scene in the film.

The first group of men was addressed by Mr. Prigozhin, who said, "You have finished your contract with dignity." Next, he addresses another group, urging them to "not go too drunk, not get too high, and not rape women."

Regarding the Ukraine crisis, one of the troops seems to be stating, "We will come back to accomplish what we started."

Mr. Prigozhin said that all individuals who were given amnesty would get medals and amnesty documents within "two, three days" in another video from the same occurrence that was uploaded on social media.

Russia Behind Bars, the leading prisoner rights organization in the nation, said it is unclear what legal process was utilized to release the men. They claim this is Mr. Prigozhin's latest illegal act in his effort to enlist prisoners to fight with Russian troops in Ukraine.

In accordance with the Russian Constitution, only the President may issue pardons. Mister Prigozhin's claim lacks evidence, and the Kremlin press service did not immediately respond to a request for comment.

According to Wagner deserters and human rights advocates, these allegations of pardons come at a time when the firm is having difficulty recruiting new detainees in the midst of mounting reports of high fatality rates for frontline Russian troops and of uneven payments by the corporation.

According to Russia Behind Bars, Wagner has managed to enlist at least 35,000 inmates for military duty since June. The organization's estimate, which represented approximately 10 percent of Russia's male jail population before the war, is based on information from informants in Russian penal colonies and could not be independently confirmed.