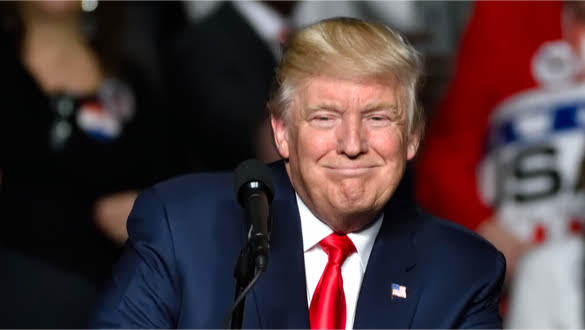 Government Shutdown, Witness Intimidation, Congressional Perjury, Dozens of Scandals on the road to impeachment. Yet, the U.S.  stock market is climbing on hopes of an end to the Chinese trade war.

As our nation approaches the fifth week of a partial shutdown, the President and his former and current administration faces dozens of ongoing investigations into misconduct, fraud, and perjury. A special counsel is now conducting investigations, inspector-generals, local, state and federal authorities, and the prospect of a half a dozen live broadcasted Congressional investigations the danger to our democracy has never been greater.

“What makes the Cohen lies even worse — and yes, far worse than Watergate — is that it exposed any U.S. officials who were involved in orchestrating his false testimony to blackmail by Russia,”

“If Trump suborned false statements, the President would have exposed not only himself to Kremlin blackmail, but also other members of his team who, according to court documents and reporting, helped orchestrate his personal lawyer’s congressional testimony.”

Goodman argues that even Trump’s nominee for attorney general, William Barr, would not step in to save him if Trump is proven to have instructed Cohen to lie.

“It would be such a clear-cut case of obstruction of justice; it’s proven to be true.

William Barr, the man nominated for attorney general with extreme views of presidential power, has written and testified this past week… that.

“suborning perjury or inducing a witness to change their testimony is a criminal act for which no presidential power protects it,”

President and Trump, his personal lawyer Rudy Guiliani and other supporters are echoing the defense that Cohen is “lying to reduce his jail time!” They’re choosing to ignore that there is likely plenty of documented evidence to support Cohen’s accusation. It’s also very likely that this latest revelation by the president’s former personal lawyer of more than a decade; is just the tip of the iceberg.

This latest revelation so spooks president Trump that he has now twice threatened Michael Cohen’s father in law, which amounts to witness intimidation, another felony the president could be charged. His latest Tweet leaves no doubt about his threat. 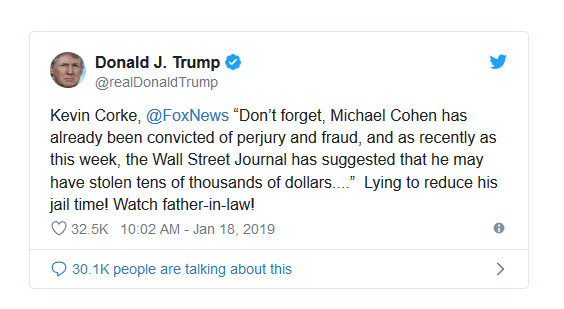 So far the President hasn’t specifically denied the BuzzFeed report. This morning even Kelly Anne Conway refused to deny the allegations contained in the news report, instead of saying …

“The President weighed in on this on Twitter this morning, so I’ll refer you to that,” Conway said in response to a question about the report.

Kelly Anne Conway’s husband, however, is acknowledging if the report is true, it’s a game changer and a huge deal by re-tweeting former SDNY Head Preet Bharara thoughts on the disclosure…

Instead, Trump is tweeting about Republican solidarity in keeping the partial government shutdown continuing, and lying about Democrats position which completely favors a strong border and security funding but not allocating $5.7 billion for the construction of a Wall; he had promised Mexico would pay for… 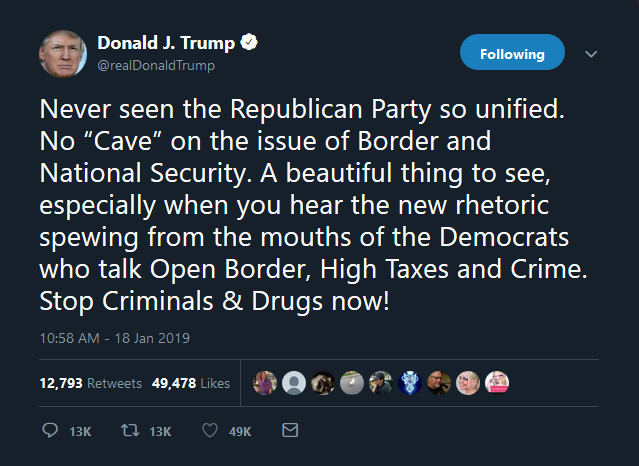 The Trump administration has turned in to a three-ring circus and sooner or later Wall Street is going to wake up and see the economic damaged that’s been done, when that happens we could see an even bigger nose-dive than we saw on December.

Bloomberg reports the headline index came in at 90.7 in January, that’s sharply lower than consensus estimates of 96.8. In December’s reading of the index was 98.3. The latest reading is also the lowest reading October 2016, when the index tally was at 87.2. Worse it’s the just the latest economic metric to drop to pre-2016 election levels.

Richard Curtin, the Surveys of Consumers chief economist, said in a statement...

“The decline primarily focused on prospects for the domestic economy, with the year-ahead outlook for the national economy judged the worst since mid-2014,”