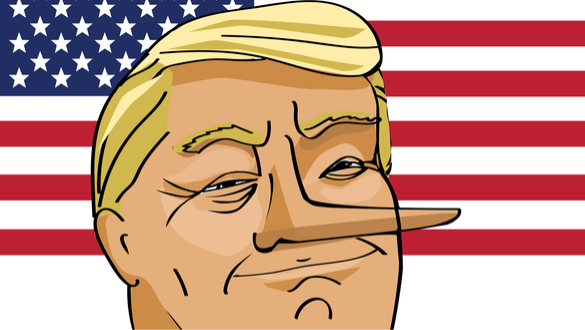 Washington Post’s fact checkers are calling attention to the acceleration of President Trump’s lies and misleading statements for two reasons. First, he reached the 10,000 mark and is dramatically increasing the frequencies of his lies and misstatements just as his reelection campaign is beginning.

President Trump has proven himself to be one of the biggest liars ever to be elected President reaching over 5,000 false and misleading claims in The Washington Post Fact Checker’s database, an average of eight claims a day – in just the first 601 days since being sworn into office.

Frankly, it’s hard to think of any national leader in the past 100 years beyond Italy’s Mussolini that has lied anywhere as much as an intentional political strategy. At this point 827 days into his presidency he has ramped up his lying to a meteoric pace. In just the last 226 days Trump has almost tripled his speed of lying. He’s now lied or made material misrepresentations more than 10,000 times – increasing the speed of his dishonesty by nearly three times his pace to 23 times false or misleading statements a day.

The Washington Post considered reaching the 10,000 mark unlikely when The Fact Checker first started this project during his first 100 days. According to WaPo…

“In the first 100 days, Trump averaged less than five claims a day, which would have added up to about 7,000 claims in a four-year presidential term. But the tsunami of untruths keeps looming larger and larger.”

The rate of Trump’s lies and misrepresentations jumped dramatically (an average of nearly 23 claims a day) as he’s begun holding his re-election rallies, his partial government shutdown over his promised border wall, the release of special counsel Mueller’s devastating report on Russian interference in the presidential election and is heinous attempts to obstruct justice. WaPo began the day with a lead article that pointed out…

Trump lying has been non-stop…

·        In a recent 45-minute telephone interview with Sean Hannity of Fox News on April 25 lied or misled views and listeners with 45 bogus claims.

·        An eight-minute gaggle with reporters the morning of April 26 resulted in eight lies, bogus claims.

·        His speech to the National Rifle Association delivered another 24 bogus claims.

·        Then there was the campaign rally in Green Bay Wisconsin on April 27 where he appeared to be in a race with the devil with a shocking 61 lies and twisted assertions.

The Washington Post pointed out that Trump’s Twitter addiction isn’t helping. His constant Twitter barrage is a tour-de-force in lying and false political misrepresentations. Through Twitter, the President has made 171 false or misleading claims from April 25-27, just three days. It’s a remarkable rate of deception when you consider it’s at a pace that exceeds any single month in the first five months of his presidency.

Trump’s penchant for repeating lies and false claims has also been tracked by the WaPo Fact Checker database documents nearly 300 instances he has repeated a variation of the same false or misleading claim at least three times.

Trump according to the Washington Post has now racked up 21 “Bottomless Pinocchios,” which are defined as his earning Three or Four Pinocchios that he has repeated at least 20 times.

Trump loves his campaign rallies, openly testing and hammering his lies and misstatements so frequently that his rallies account for approximately 22% of all his deceit. The rally in Green Bay on April 27 was a smorgasbord of misrepresentations and lies…

·        Trump exaggerated the size of trade deficits with Japan, China, and the European Union and falsely claimed the United States loses money from such deficits.

·        POTUS claimed he had “nothing to hide” from the Russia investigation but refused to testify informally or under oath.

·        Trump continued his practice of inflating and distorting his admirations jobs record by starting the count from the election, not his inauguration.

·        He sounded utterly unhinged when he went off on a despicable rant saying the Green New Deal will require every building in Manhattan be replaced and insisting Democrats support the killing of healthy babies that have been born.

·        Trump misrepresented the impact of the new trade agreement with Canada and Mexico in many ways and trashed the North American Free Trade Agreement, even though the differences are very modest.

·        Trump once again took credit for the Great Lakes Restoration Initiative his administration has tried to kill several times.

His false claims that the current law governing immigration, he described as “an open border policy bringing tremendous crime even though there is absolutely no documented link between illegal immigration and crime).

Trump claimed he passed the biggest tax cut in history which isn’t factual and he said he had cut the estate tax to “zero” which is complete bullshit.

All of this leads to some serious questions for both U.S. citizens and investors around the world…

Will President Trump and his disastrous administration face a reckoning for all these lies or is the United States heading into an authoritarian autocracy that will become the new normal?

How will the financial markets behave in response to a never-ending the stream of corruption, lying and establishment of a 1984 Orwellian Reality?

Is Trump willing to start a war with Iran by lying to the American people just before 2020 to fan the flames of U.S. Nationalism?