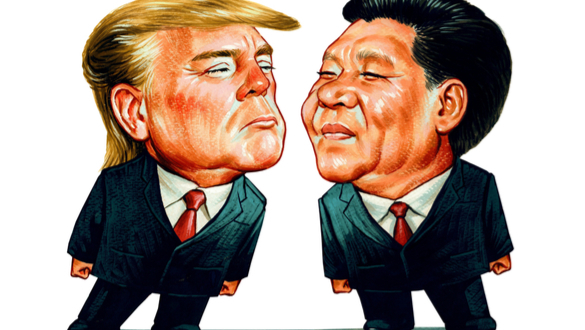 Trump’s threat to raise tariffs on $200b of Chinese exports from 10% to 25% isn’t likely to happen until after the two meet face to face. Trump wants to meet with China’s President Xi soon.

With a new round of trade talks taking place this week in Beijing lead by Secretary of the Treasury, Stephen Mnuchin and U.S. Trade Representative, Robert Lighthizer, the prospect of negotiating a deal to end the US - Chinese trade war appears to be improving. President Trump’s desire to meet President Xi very soon was confirmed by White House adviser Kellyanne Conway Monday on Fox News…

“He wants to meet with President Xi very soon. This president wants a deal. He wants it to be fair to Americans and American workers and American interests.”

Until recently, President Trump has held a hard line and has consistently said that if there’s no deal by the March 1, 2019 deadline, he will more than double the rate of tariffs on $200 billion in Chinese imports. Now it appears that Trump wants to meet China’s Xi Jinping to end the trade war. It’s clearly a signal that negotiators are close to a workable deal between the biggest economies in the world.

Given Trump’s low approval poll numbers – he’s more than 14 points underwater according to the fivethirtyeight.com’s polling average among adults and underwater by 12 points among likely voters – Trump is looking for a win and the glory of making it look like he closed a deal and fulfilled his promise of being a world-class negotiator.

Chinese Vice Premier Liu He, Lighthizer, and Mnuchin were seen arriving at a Beijing hotel today. Both sides are looking to make it clear to both President Trump and the world’s financial markets that negotiations are showing credible progress and are looking to forge a mutually acceptable draft of the deal including the crucial issue of how to enforce it.

Meanwhile, political observers and analysts are reporting Trump Administration officials are privately acknowledging that the “drop-dead deadline” set by President Trump is likely to be extended to allow for a face-to-face meeting between the two leaders. The same sources, however, are trying to figure out how to extend the deadline for the deal while maintaining a sense of urgency on the Chinese side at the same time. One way would be to set up a meeting between Xi and Trump at his Mar-a-Lago resort in Florida by March 15th. The Chinese want an extension and are expected to be open to a meeting between the two leaders by Mid March.

"I think there will be positive outcomes from this round of trade talks because the two sides have shown willingness to seek a deal… Even if no deal is reached in this round of talks, I don’t think tariffs will be hiked on March 1. The highest possibility is that the U.S. will agree to postpone the deadline, buying time for the two leaders to meet and sign off on the final deal."

President Trump has said no deal will be final until he meets with his Chinese counterpart, which some observers are interpreting as a sign that Trump wants to be the one to announce any deal agreed to that ends the trade war, and make the most of the “win” with as much public relations as possible. Starting with the rally in El Paso, President Trump has begun his 2020 re-election campaign.

The reality that his re-election effort has begun is clear as the skyrocketing numbers of farm bankruptcies and fears of a global economic slowdown are providing a strong incentive for President Trump to nail down an end to his trade war with China. Rising military tensions in the China Sea between the two largest economies in the world are also seen as a strong motivation for both leaders.

However, China is also strongly motivated now because it’s dealing with an economic slowdown. The slowing of growth is providing a strong incentive for the Chinese government to meet as many of Trump’s demands that it can to put an end to the trade war.

Besides China’s recent purchases of 7 million tons of soybeans, China is also already fast-tracking the approval of a law that would ban theft of intellectual property and forced technology transfers.

It’s still unclear how far China is willing to go. The U.S. is now pushing a plan of prioritizing spending on artificial intelligence research, while China has been pursuing a policy designed to make its nation dominate in AI and advanced technologies.