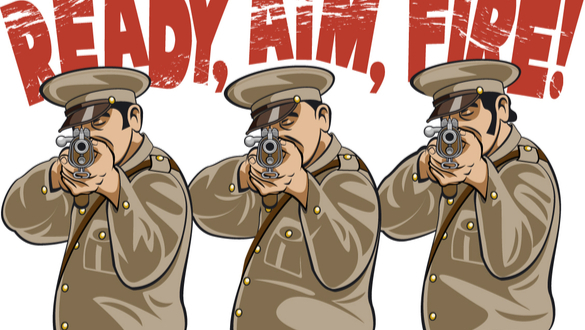 When told during a press conference that the U.S. Constitution prescribes the death penalty for treason, and asked whom he’s accusing, President Trump named four former members of the FBI including James Comey, Andrew McCabe, Peter Strozk and Lisa Page for execution.

President Donald Trump took another step towards destroying the rule of law in the United States and positioning himself as a fascist dictator during a news conference yesterday for farmers hurt by his trade war with China. When a reporter confronted the commander-in-chief over his past remarks about treason and pointed out that treason is punishable by death, and asked him whom he is accusing of treason -- Trump did hesitate to double down on his accusations of treason and named names…

“Sir, the Constitution says treason is punishable by death. You’ve accused your adversaries of treason. Who are you accusing of treason?”

“Look at Comey, McCabe, people higher than that. If you look at Strozk if you look at his lover, Lisa Page, his wonderful lover. They talked openly. They didn’t use their private server because they didn’t want to get caught. So they used the government server. That was not a good move.”

Trump said, echoing many of his previous statements…

“They’re trying to take down the wrong person,”

The Mueller investigation and related events were, according to Trump, “insurance policy just in case crooked Hillary loses. That didn’t work out well for them.”

The President went on to once again suggest the four former members of the FBI he mentioned by name are indeed guilty of treason, and therefore deserve the death penalty.

Trump’s latest comments are terrifying and demonstrate he sees himself as a both above the law and as having dictatorial powers. Meanwhile, two Federal Courts have ruled against him and refused his lawyers requests for stay orders to prevent one for his former accounting firms and Deutsche Bank from turning his financial records over to Congressional committees into a myriad of potential crimes including but not limited to tax fraud, money laundering, wire fraud, insurance fraud, and obstruction of justice.

While Trump is attempting to prevent the testimony before Congress of key witnesses and former White House employees are likely to prove futile, there is one person that not named so far that should be called to testify that could end any pretense of the innocence of the President.

Allen Weisselberg, the C.F.O. of the Trump Organization, will soon be called to testify before the House Intelligence, House Judiciary, and House Banking Committees. Mr. Weisselberg has been Trump’s primary accountant since Trump entered his father’s business in 1973.

Mr. Weisselberg has reportedly turned both Federal and State witness and has been cooperating with ongoing investigations by the SDNY and NY Attorney General. It’s believed that Weisselberg knows where the bodies are buried and has already given a deposition in a Trump Foundation lawsuit that revealed his and the members of the Trump family including the President’s willingness to engage in practices are far outside financial norms.

Journalists investigating President Trump’s long history of financial miss-deeds insist that Alan Weisselberg knows more than any other person—including President Trump—about the specifics of how the President made his money, who supported him financially. It is impossible to imagine a thorough investigation of Trump’s potential conflicts of interest without a full accounting from Weisselberg.

The President has no defense or claims of executive privilege to keep Alan Weisselberg from testifying before Congress.

Meanwhile, the purpose of the news conference in the first place a $19 billion disaster-aid package stalled in the House of Representatives on Friday after passing the Senate on Thursday thanks to efforts by Rep. Chip Roy, a Texas Republican, who objected to a so-called unanimous consent request. The measure that will likely be voted on June 3, 2019, when lawmakers return from recess; besides helping farmers also helps several states and Puerto Rico recover after a series of hurricanes, floods, and wildfires. Some Democrats want the legislation also to include a rescission of the monies commandeered illegally by President Trump to build his wall.