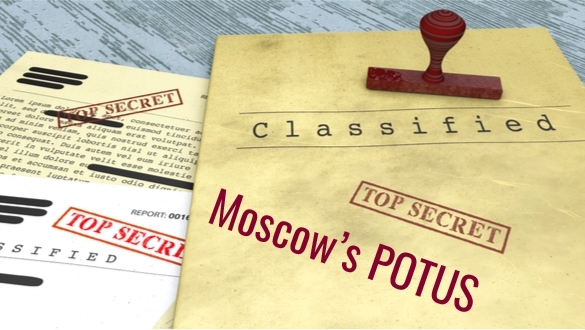 The real story on how about the inception of the investigation into Russian efforts to hijack the 2016 U.S. election shockingly resembles a Tom Clancy espionage novel… “Moscow’s POTUS”... the story of Russian President engineering both the election defeat of a bitter American enemy, a former Secretary of State who runs for President, while at the same time engineering the election of a greedy, narcissistic Russian stooge as President of the United States.

The New York Times page one story on May 24th story titled Potential Clash Over Secrets Looms Between Justice Dept. and C.I.A. reveals an ongoing effort to reveal the identity of one of this country’s secrets. The identity of a C.I.A. informant, a deep undercover agent so close to President Vladimir V. Putin of Russia that he or she is in his inner circle. This American spy it turns out alerted U.S. intelligence about Vladimir Putin plans and ongoing operations to defeat Hillary Clinton and elect Donald Trump President in 2016.

Uncovering the identity of this American spy has been Putin’s number one obsession for the past two years. President Trump granting the “attorney general’s ability to declassify any intelligence information and documents is yet another attempt to expose the U.S. spy in Putin’s inner circle.

It’s time to recognize when Trump sold his soul to our Russian antagonists in exchange for their help in getting him elected by manipulating public opinion via social media and by even potentially changing vote totals via computer hacking.

President Trump has had dozens of phone conversations on top of his meetings face to face meeting with Putin that went unrecorded (illegally) in which the subject of the identity of the CIA mole has been discussed. It’s likely the two have strategized the decision to assign the unmasking of the Kremlin spy to an unsuspecting AG Bill Barr by granting the Trump sycophant the authority to both investigate how the Russian investigation began and to make public secret information. It’s a brilliant gambit that will expose one of the most valuable U.S. intelligence assets of our generation and cripple our intelligence gathering capabilities.

So while Donald Trump names a list of courageous former FBI member, he believes committed treason and who should be executed he’s at the same time - Moscow’s POTUS, the real traitor in our midst.

The evidence of the existence of the U.S. spy in Putin’s inner circle goes back to 2016.  When learning from the spy that Putin was planning to influence and possibly hack the election, President Obama immediately notified Senate Majority Leader Mitch McConnell to join him in making the plot public.  McConnell refused to cooperate.

Thankfully Obama never revealed the identity the CIA mole to McConnell who is now submerged in a $200 Million Russian aluminum scandal involving a Russian Oligarch in Putin’s inner circle. The scandal is just rearing its ugliness and will likely not reach a full boil for several months.

The existence and identity of this Russian mole should never have been revealed. The entire purpose of AG Barr’s new investigation and being granted complete access to this top secret information is to expose the identity of this mole in Moscow so Putin can exact his revenge and compromise U.S. intelligence capabilities. In doing all this Trump has set Bill Barr up to fulfill one of Trump’s most important payoffs for being elected President with Putin help, and for keeping the billions of laundered funds by Trump for Putin’s Oligarchs through Trump’s businesses secret.

Tom Clancy couldn’t dream up a better thriller than the unfolding of “Moscow’s POTUS” we are all watching unfold. A corrupt, treasonous deranged U.S. President determined to subvert the U.S constitution and establish himself as a dictator.  The subtitle of the book could easily be…”The end of the American Democratic Republic.”