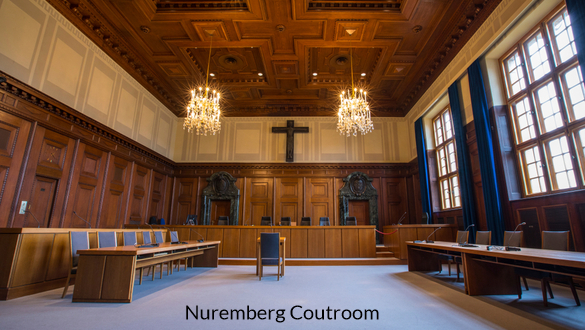 During World War II, the Nazis waged the Battle of Britain, which was a wide-scale military air bombing campaign that was directed against the citizens of England to break their resolve of continuing their resistance against being conquered by Nazi Germany from June of 1940 to May of 1941. The bombing of civilians and English cultural sites were among the war crimes charged against captured Nazi leaders during the Nuremberg trials after the war.

President Donald Trump had threatened to bomb 52 targets in Iran, including cultural sites. The risk of making such an atrocity ridden statement in public suggests the United States is contemplating the possibility of committing the same kind of war crimes committed by Nazi Germany during World War II.  The reason civilized cultures record and teach history is so we learn from the successes and mistakes made by our forefathers. Suggesting or threating an abhorrent act of cultural destruction to another or attacking their innocent populace, even that of an enemy regime, is beneath us as a people Mr. President. We the People of the United States and the legacies defined by our forefathers stand for much more.

During CNN’s “New Day,” an early morning Sunday news show, Lynn Sweet, a CNN contributor on the show, points out that President Trump’s Saturday night threat to launch attacks on Iranian cultural sites and institutions is the very definition of a war crime. Calling into question whether this President is willing to adopt the very same war crimes adopted as a military strategy of the Nazi regime that targeted civilians.

Making her case to CNN host of the show Victor Blackwell, Sweet insisted that if President Trump thinks this will help give GOP Senators more of a pause before voting for his conviction during an impeachment trial, he could be in for a rude awakening.

“What’s the overlap here of the Iran discussion and the impeachment trial and does this weaken the Democrats’ hand?”

“It doesn’t weaken it, (threats over bombing) these 52 targets Trump is talking about striking include cultural sites in Iran… that’s a war crime.”

The bombing of Iranian cultural sites and mass murder of Iranian citizens both war crimes could bring the end, collapse of NATO, and lead to demands from the post World War II alliances across the globe. Just last month China, Russia and Iran agreed to conduct joint naval drills.

Chinese Foreign Minister Wang Yi told his Iranian counterpart in the Chinese capital last Tuesday that Beijing and Tehran should stand together against “unilateralism and bullying,”

Minister Wang said Zarif, who arrived in Beijing after a visit to Moscow, that the parties involved in the pact should “withstand external pressure and deal with disputes through dialogue and negotiations to continue safeguarding and implementing the comprehensive deal.”

“China will firmly defend international justice and fairness, and oppose any unilateralism and bullying behavior to push for a political and diplomatic solution to the Iranian nuclear issue,”

In response to the assassination of Iran’s Major General Qassem Suleiman, the leader of Iran’s Quds Force and considered the second most powerful man in Iran, the government Iran announced was withdrawing entirely from the 2015 Iranian Nuclear Treaty.

President Trump in announcing the assassination of Major General Qassem Suleiman would reduce the chances of a war between the United States and Iran. The President argued that military intelligence had warned him that the Suleiman was planning multiple impending attacks on U.S. military, economic and diplomatic targets with its proxy militias. So far, no evidence has validated that this was true from a President whom the Washington Post says has lied outright - or misrepresented facts over 15,000 since he has been in office.

Respected journalists David Corn and Matt Cohen of the Daily Beast published an editorial on Friday, January 3, 2019, titled - With a War Against Iran Brewing, Don’t Listen to the Hawks Who Lied Us Into Iraq.

Poignantly, Corn and Cohen state for the record…

One final footnote  Mr. President.  All the world and millennia of future world-wide generations will be watching and judging if you conduct yourself like a civilized and moral leader of United States values.