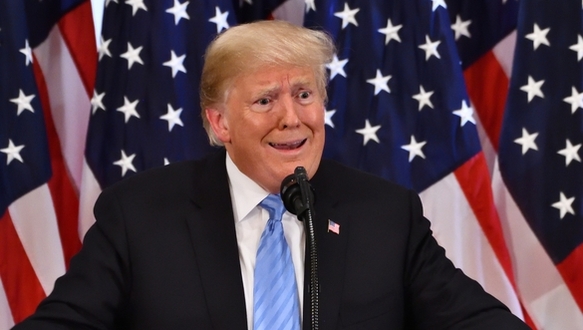 President Trump goes full Captain Queeg, lashing out on many fronts, as a myriad of scandals threaten to bring him, his family and his administration towards a series of Constitutional showdowns that he will ultimately lose. Make no mistake - shutting down the government will only serve to wreak more havoc on Wall Street, further damage the U.S. and World’s economy.

“It was when the strawberries went missing. I knew they were all against me.”

One of the greatest movies of all time, based on the Pulitzer Prize Book, The Cain Mutiny featured Captain Queeg played by Humphrey Bogart who suffers a mental breakdown while commanding a U.S. mine sweeper during the Second World War in the Pacific.

Through the course of the story, Captain Queeg displays a growing paranoia and mental instability that culminates in almost losing the ship and its crew in a hilarious storm. The officers under Queeg feeling as if Queeg’s mental illness and danger had become so great, relieve the Captain of his command.

Humphrey Bogart’s performance in the roll of Captain Queeg won him the Academy Award for Best Actor in 1955. Playing a mentally compromised narcissistic paranoid mentally ill person is a lot harder to do than actually being one. I realize this every day as the walls are starting to close in on President Trump. Instead of art imitating reality, we are witnessing reality imitating art.

Like the character Captain Queeg, President Trump finds himself sailing directly into the biggest typhoon since Watergate.

Instead of dealing just with an ongoing war, and a cover-up of a crime that he was up to his neck in, Trump is also dealing with the worst political loss in a midterm election since 1974. A public rebuke by a margin of as much as 8.8 million voters nationwide. But Trump’s troubles don’t end there.

Trump’s tone deafness and steadfast support for the Saudi Crown Prince who ordered the live vivisection of  The Washington Post Journalist and U.S. resident Jamal Khashoggi in violation of international law is turning into a major international scandal.

This latest scandal on top of a worldwide trade war of his own making and announcement that Trump is about to unilaterally break one of this country’s most valuable trade treaties by completely shutting down our board with Mexico and putting a complete stop to trade, an economic intercourse with Mexico.

The President to my observation is becoming as unhinged as Captain Queeg during the storm. His post panic diatribes after he goes off the rails are reminiscent of the Queeg’s courtroom testimony with the addition of one lie after another.

His threats to compound all the danger comes after his lack of lucidity has already resulted in spending an estimated $220 million to send active military troops to the U.S. Mexican border with orders to shoot and kill, over 800 miles away from where the “Caravan” of refugees are arriving is a testament to his unbalance mental condition.

Worsened by a narcissistic dismissal of the sacrifice of the soldiers are making being sent to sit in the middle of the Texas wilderness during Thanksgiving for literally no reason only further demonstrates his mental unraveling under all the pressures besieging him.

The problem with all this mishegoss (Yiddish for senseless and crazy behavior) is that it has begun to unravel our nation’s economic security. The Dow Jones Industrial Average a stalwart measure of the U.S. financial markets is off 10%, now in correction territory.

Shutting down the government and the Mexican/U.S. border could send our financial indexes down another 10%, into a 20% plummet in total which would take the markets into a bear market, and yes the United States into an economic recession.

The added mental stress of now seeing his daughter Ivanka submerged in an email scandal of her own making is not going to help right Trump’s mental state  which is problematic to say the least.

If Trump in his addled state shuts down both the U.S. government and the Mexican border – you don’t want to own stocks. The fact this all may be happening at a time when at any moment a series of previously filed indictments may be unsealed that may include Donald Trump Jr. as a criminal defendant and expose the President himself as an unindicted co-conspirator just compounds the danger for investors holding equities of any kind.

Our advice, if you’re long, be prepared to get out of stocks to avoid what could be the worst stock market meltdown since January of 2009. Batten down the hatches; we’re heading in to an economic storm even greater than that experience by The Cain and its crew.