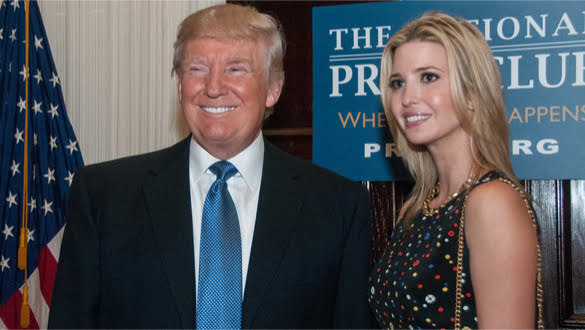 The brilliant and talented conman is cornered but still has tens of tens of millions of Americans’ loyalty.  They could care less if New York City and the state have a grand jury already empaneled. The New York Times confirms a civil and criminal fraud investigation may also be targeting Ivanka Trump.

The irony is as thick as oatmeal. Suppose Trump pardon every one of his swamp creatures, from Michael Flynn to Lyndsey Graham, and even pardoned himself and all of his family members for all past crimes. President Trump, his three oldest children, would have to hope for a pardon from Governor Andrew Cuomo.

Sometime last night, when The New York Times confirmed that New York State officials have now opened a civil and a criminal fraud investigation into tax write-offs.  Outgoing President Donald Trump took on various consulting fees he paid out, including some to his daughter Ivanka.

“This is harassment, pure and simple. This ‘inquiry’ by NYC democrats is 100% motivated by politics, publicity and rage. They know very well that there’s nothing here and that there was no tax benefit whatsoever. These politicians are simply ruthless.”

Ivanka is on the hot seat for potential tax fraud

Hopefully, if New York Authorities charge Ivanka, she realizes she wasn’t daddy’s favorite for nothing. She’s built an $800 million fortune, according to celebritynetworth.com.

These two separate inquiries — a criminal investigation by the Manhattan District Attorney, Cyrus R. Vance Jr., this new civil and or criminal one by New York State Attorney General Letitia James — are being conducted independently. Still, the two law enforcement offices do have a tradition of cooperating.

The New York Times reports that both offices have issued subpoenas to the Trump Organization in recent weeks for Ivanka Trump records.

“The subpoenas were the latest steps in the two investigations of the Trump Organization, and underscore the legal challenges awaiting the president when he leaves office in January. There is no indication that his daughter is a focus of either inquiry, which the Trump Organization has derided as politically motivated.”

Ivanka is a mere pawn when it’s all said and done. I continue to believe she and her oldest brothers will end up taking pleas and their father will wind up living out his life a prisoner in a custom stockade on a military base. Let’s hope they don’t allow him access to any social media. Before that comes to be, I expect Trump to turn his post presidency into at least a 4 year re-election campaign and get paid to do it even if he is indicted and convicted.

Bottom line: thirty-five percent of this country will believe in him even if two million of us die from COVID-19.

As for Ivanka, she could be looking at an extended stay as a guest of New York State or, worse, Rikers Island in New York City.  The Trump’s, including Donald, would do well to a two-hour reality show post-presidency that follows there day to day madness, especially through criminal trials. The ratings would be huge!