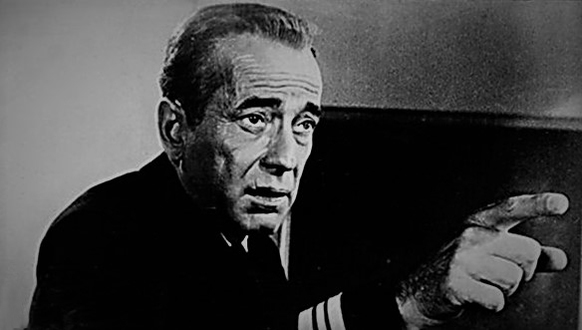 “ Ah, but the strawberries, that's where I had them, they laughed at me and made jokes, but I proved beyond the shadow of a doubt, with geometric logic, that a duplicate key to the wardroom icebox did exist, and I've had produced that key if they hadn't pulled the Caine out of action”

President Trump has been working himself up in the last 36 hours into what can only be described as a frenzied White House version of the “Caine Mutiny” in response to the Opt-Ed published by the New York Times signed by “anonymous.”

To help find the “gutless traitor,” Sen. Rand Paul (R-Ky.) is suggesting every possible suspect be sat down for a polygraph test. Paul says it would be quicker than interrogating every White House and Administration ‘senior official” as to whether they wrote in The New York Times that President Trump is "amoral."

"I think if you have a security clearance in the White House I think it would be acceptable to use a lie detector test and ask people whether they are talking to the media against the policy of the White House."

Senator Paul is no stranger at calling for lie detector tests, previously suggested the use of lie detector tests to determine who leaked transcripts of communications between former National Security Adviser Michael Flynn and a Russian ambassador, said it was important to figure out who wrote the op-ed this week. The fact that Michael Flynn may have compromised U.S. national security has never been acknowledged by the senator.

Now that it’s abundantly clear to the vast majority of observers something may be very wrong with the President’s mental health, as outlined in both Bob Woodward’s new book “Fear” and in the Opt-Ed published by the New York Times authored by “anonymous.” Senator Paul once again is unable to see the danger and instead is focused on helping the President launch a real witch-hunt.

Many experts disagree about the effectiveness of lie detector tests. Senator Paul, however, insists that they are used on CIA and FBI agents, so they should be used on administration officials, too. Paul is quoted as saying …

"This could be very dangerous if the person who is talking to the media is revealing national security secrets," he said. "So yes, I think we need to get to the bottom of it."

Senator Paul shows absolutely no concern about the inconsistencies on the President Trump’s behavior and the danger it represents to National Security.

Perhaps it will take a public mental breakdown to awaken Senator Paul to the legitimate danger of President Trump’s mental imbalance. His campaign rallies are starting to become 90% about his paranoia and perceived enemies and 10% about the campaign he’s trying to boost. The comparison to Captain Queeg portrayed by Humphrey Bogart is uncanny!