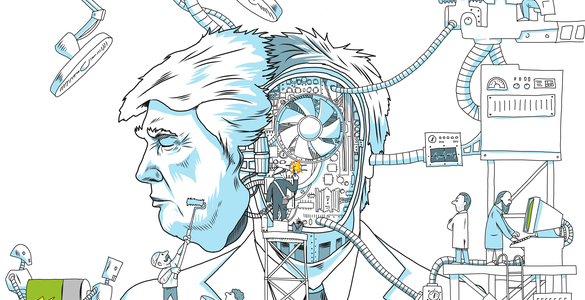 Monday’s tweetstorm by President Trump was exceptionally detached from reality and devoid of truth. The consequences of his stupidity and lack of intelligence will be much worse than the stock market crash that’s now underway.

President Trump hailed the oil sell-off as good news on twitter because consumers will pay less at the pump and fail to realize that if oil drops to $20 a barrel, it will crush U.S. oil companies and the banks that finance them. It could cause a third Russian revolution and result in the overthrow of the current murderous Saudi regime and kill all of the promised arms sales pledged by Crown Prince Mohammad Bin Salman Al Saud.

The consequences of a crash of this magnitude on the U.S. and the World’s banking system could set off a financial crisis much worse than that of 2008-2009. Shipping companies, railroads, airlines, hotel chains, cruise lines, almost every industry is going to be crippled. In short, the unemployment rate will go from 3.4% to 8% in a few months.

Trump’s lack of intelligence was also amplified by his tweets on the coronavirus yesterday. In his last tweet this morning, the president downplayed coronavirus fears by emphasizing that “life & the economy” don’t shut down for the seasonal Flu each year.

Okay, Mr. President, but that fact is the coronavirus is 30-50 times more deadly than influenza and other strains of the Flu – especially for people over 60 years of age with underlying health issues. Further, the coronavirus is less understood by scientists at this point, making its full risk to patients unknown.

According to the Center for Disease Control and Prevention, the United States’ death rate of those who have been infected with the Flu has been around 0.1% since 2010.  The data currently correlated for COVID-19 suggests the demographics for the same population will potentially be higher than  3%.

Reviewing Trump's comments this week our president has blamed Saudi Arabia, Russia, and the “Fake News” for Monday’s drop in the market, and made the tweet comment that "nothing is shut down," while comparing the corinavirus to the common flu.

Is there no one in the White House capable of preventing President Trump from destroying his Presidency?