President Trump Insisted the U.S. and China Will Sign Phase One on January 15th 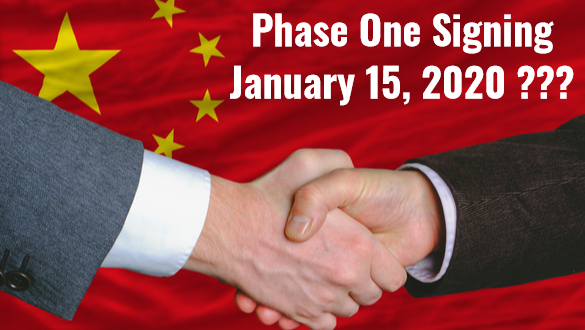 On  December 31, President Trump said a signing ceremony for the Phase One Trade Deal would be held at the White House and that he would go to Beijing to continue discussions about a Phase Two Trade Deal.

President Trump promised via Twitter that the United States and China would sign a “huge and comprehensive” trade deal at the White House on January 15, 2020. So far, the exact details of the agreement have not released, and his Tweet has yet to be confirmed by either party despite the fact we are only seven days away from this predicted event.

If the signing were to take place on January 15th and there was no collapse, the Phase One deal would cement an agreement that took nearly two years to negotiate and would hopefully formalize a trade truce between the world’s two largest economies.

The President in his New Year eve Tweet announced the date of the ceremony on Twitter and predicted that “high-level representatives of China” would attend the signing ceremony. He then planned to travel to China “at a later date” to begin talks on the second phase of the agreement. The lack of specificity on when he would travel to China to start negotiations on the Phase Two deal begs the question to available time for scheduling his travel overseas, given the general election campaign will be in full swing well before the summer political conventions are set to commence.

Mr. Trump did not say whether Xi Jinping, the Chinese leader, would be in attendance or name any representatives from China who might attend the ceremony.

Despite the fact, the text of the agreement was reached in mid-December,  it has yet to be made available to the public. The exact contents have yet to be fully vetted by experts or the many businesses that have suffered from the protracted trade war over the past two years with China.

One rumor insists the deal would reduce only a small portion of the tariffs that Mr. Trump imposed on $360 billion worth of Chinese goods, leaving many levies in place.

Both high level Chinese and U.S. officials have said the agreement includes commitments from China to increase purchases of American farm and energy products, places limits on Beijing’s ability to weaken its currency, and provides enhanced protection to American companies doing business in China. According to U.S officials, the Phase One agreement would also reduce tariffs on about $120 billion worth of goods and have forestalled new tariffs that were scheduled to be imposed back on December 15, 2019.

The pledge that China’s farm purchases would increase to at least $40 billion annually over the next two years and that total exports of food, energy, manufactured goods, and services to China would increase by a total of $200 billion have remained vague as Chinese officials have remained quiet when describing what they agreed to buy and on what timeline they have agreed to make the purchases.

Peter Navarro, the White House trade adviser, told CNBC on New Year’s Eve that the U.S. negotiating team was continuing to work out the final details before the signing, which he expected during the first week of January. This schedule has already proven to be too ambitious.

“We’re just waiting for the Chinese translation of the 86-page agreement,”

The first phase does not address most of the essential concerns that the United States has with China’s economic practices, particularly its industrial policy and subsidies of state-owned enterprises. President Trump has insisted that issues will be addressed in future talks, and he has said the remaining tariffs would continue to exert pressure on China to accede to America’s demands. The reality is it won’t happen until after the 2020 general election if it happens at all.

Michael Pillsbury, a China scholar at the Hudson Institute who advises the Trump administration, said…

“Translating the text of the agreement had been complicated because the United States wanted to ensure that the commitments were legally binding rather than just statements of what China’s intended.”

” Mr. Pillsbury said, suggesting that Mr. Trump publicized the date of the ceremony on Twitter to put additional pressure on China.

“We’re entering a period now, before the signing, to see if it really gets locked in or they renege again.”

Key Chinese stocks covered by World Opportunity Investor BABA, BZUN, YY (JOYY), and MOMO are already starting to rally in anticipation of a the Phase One Trade Deal signing. We believe that when the Phase One section of the trade deal is signed, these stocks could rally another 20% to 30%.