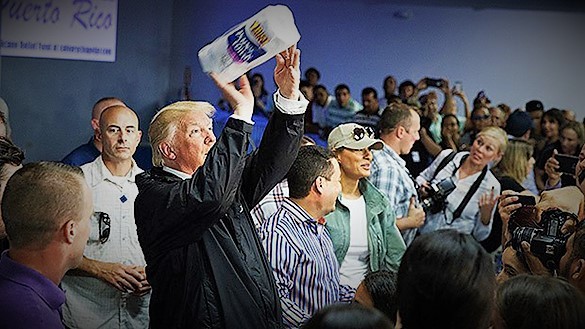 President Trump ignores the official causality count, almost a year that large swaths of the island’s electricity have been out, and 60,000 homes remain topped with tarps because their roofs as well as their U.S. citizenship status are  seen as being nonexistent. This will likely prove to be a political blunder that costs the GOP big losses in Florida and Georgia with large numbers of Puerto Ricans that have been transplanted to the mainland since Maria.


President Trump managed once again to show his capacity for meanness, lack of empathy, and his outright ignorance yesterday when he was asked at the White House what lessons could be learned from Hurricane Maria as Hurricane Florence bears down on the Carolinas.

Maria was the "hardest one we had by far because of the island nature,"

"I actually think it was one of the best jobs that's ever been done with respect to what this is all about.

"The job that FEMA [the Federal Emergency Management Agency] and law enforcement and everybody did working along with the governor in Puerto Rico, I think was tremendous. I think that Puerto Rico was an incredible, unsung success."

The insanity of President Trump’s response in the face of what happened in Puerto Rico during and after Hurricane Maria hit mid-September is unfathomable.

Maria caused catastrophic damage to the northeastern Caribbean and was the most intense cyclone worldwide in 2017.

The damage to Puerto Rico and the territory infrastructure was so severe that the island continues to struggle to make repairs to its power grid and other key public resources 11 months later. Puerto Rico only just finished restoring full power last month and current estimates put the damage caused by Maria at $100 billion.

Puerto Rico is home to some 3.3 million U.S. citizens

A recent report says 8% left the island after the hurricane and many died due to poor health care and other services.

While the initial estimate of the death toll caused by Hurricane Maria was less than 69 deaths held until last week, the revised death toll of 2,975 has now been accepted by Puerto Rico as a result of a government-commissioned report by experts from George Washington University (GWU).

The revised death toll now includes those who died in the six months following the storm as a result of poor healthcare and a lack of electricity and clean water. Repeated power cuts also led to an increased number of deaths from diabetes and sepsis. This GWU report documents those from poorer backgrounds in Puerto Rico were 45% more likely to have been killed in the aftermath of the hurricane.

Adding insult to injury, Trump told reporters to go ahead and ask the officials in Puerto Rico about his and his administration’s success in responding to Hurricane Maria. However, the response from Puerto Rico’s officials to Trump’s claim of success in handling last year’s mega-storm was ANGER!

The mayor of Puerto Rico’s capital city San Juan Carmen Yulín Cruz, a vocal critic of President Trump, has described his response to Maria as a "stain on his presidency," said his latest comment "added insult to injury."

Puerto Rico’s Governor Ricardo Rossello issued a statement yesterday in response to Trump’s claims, describing Maria as "the worst natural disaster in our modern history. Our basic infrastructure was devastated, thousands of our people lost their lives and many others still struggle".

Puerto Rico’s Governor Rossello the said via a statement:

"No relationship between a colony and the federal government can ever be called 'successful,' because Puerto Ricans lack certain inalienable rights enjoyed by our fellow Americans in the states."

That hardly amounts to an endorsement.

WallStreetRebel.com sees this latest example of President Trump distorting the truth as one of the biggest political blunders in modern U.S. history.

The fact is Puerto Rico’s 3.5 million U.S. citizens do not have voting representatives in Congress and cannot cast votes for president as a restriction of the Jones Act enacted in 1917.  As a consequence, Puerto Rican (United States) citizens were left without adequate response to the humanitarian crisis rightly given to U.S. citizens residing on the United States mainland. This is an unconscionable and deliberate act of an administration including a deaf Congress that sees no consequence from 3.5 million non-entities that can do them no harm at the polls. Based on a technicality of legal jurisprudence, our fellow citizens received little help. Yet in a few days, citizens of North and South Carolina will be getting the full blessing and resources of FEMA and the GOP legislating body.

During the nine months before the hurricane — January through September of 2017 — 343,000 people registered to vote in Florida and 18 percent were Hispanic, according to Daniel Smith, chairman of the political science department at the University of Florida.

The nine months after the hurricane — from last October through the end of June — saw 326,000 newly registered voters. Just 21 percent were Hispanic.  This means over 68,000 angry Puerto Rican voters have been added to Florida’s voter numbers. Between the sheer numbers and the anger level in the Puerto Rican community, it's highly likely this could be more than enough to hurt Republicans in November.