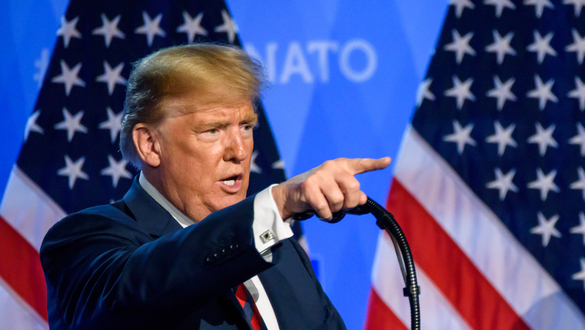 Trump repeatedly warns leaders attending the London NATO meeting that he could impose trade tariffs not only against NATO member states spending under the 2% threshold but to recover under spending going back many years.  The threat could ignite a bigger trade war than we are facing with China.

President Trump keeps repeating that not only isn’t it fair that some NATO members are not meeting the agreed 2% threshold of defense spending but that all the years they have not met the threshold be addressed. He’s further stated repeatedly this week if these NATO members don’t address these inequities, he may be forced to do so by implementing tariffs and trade blocks.

Sitting next to French President Emmanuel Macron in London, President Trump said that the U.S. would "deal with" countries "from a trade standpoint" or "in a different way" if they're "delinquent" in their defense 2% threshold spending commitments established for NATO membership.

Trump insisted "it's not fair" that NATO allies help assures their security of member countries that haven't committed at least 2% of their GDP. Then came the first trade threat…

"If something happens, we're supposed to protect them? It's not really fair…If they don't want to, I'll have to do something with respect to trade. With trade, I have all the cards."

Meanwhile, President Trump fails to understand that while the United States spends 3.4% of its GDP on defense that includes monies spent on defense forces world-wide and not just for the common defense of its members – a distinction that any informed and reasoned person should understand.

So the relevance of the 3.4% of GDP versus Greece spending (2.22%), UK (2.15%), and the more than 20 other NATO countries spending below the 2% threshold, is very much up for debate especially when military spending by NATO allies has increased significantly over the last decade, prior to President Trump taking office.

It’s this kind of miss understanding of equivalences, false conclusions that promoted

President Macron describes the NATO alliance as going through ‘brain death’ and nearing obsolescence last week which resulted in President Trump’s asserting in London that Macron's statement is insulting to NATO's military membership. Trump went on to say…

"When you make a statement like that…that is a very, very nasty statement.

President Trump then went on to make a second shocking threat of possibly imposing 100% retaliatory tariffs on French imports after the country's digital tax proposal against U.S. companies like Amazon, Facebook and Google.

Canadian Prime Minister Justin Trudeau and Canada were not immune from President Trump’s criticisms. Trump said Canada is "slightly delinquent" in its military spending requirements  — but Mr. Trudeau defended its spending, citing recent investments in fighter jets and its naval fleet and insisting that…

The continued strategy of threatening NATO members with retaliatory tariffs has drawn the attention of Nancy Davis, the chief investment officer and founder of advisory firm Quadratic Capital, who was featured as the women who nailed 2018’s stock market drop Says in MarketWatch, a sister publication of Barron’s as saying…

Davis insists that while much of the equity markets around the world are focused on the U.S.’s trade confrontation with China, the increasing trade tensions with Europe could deliver an unexpected blow to Wall Street. What we call at WallStreetRebel.com a black swan.

Davis believes most analysts are missing entirely the risk of her contrarian call on Germany and the U.S. potentially getting into a trade war with one another ahead of the 2020 election. According to Davis during a MarketWatch Nov. 18 interview

“It’s not one on the radar and when people talk trade war all they talk about is China…and the U.S. needs to have good relationships with all of its trade partners,”

Davis comments came as hope for a trade resolution and progress toward a partial tariff agreement between the U.S. and China had been a catalyst that has driven the Dow Jones Industrial Average (DJIA), the S&P 500 index (SPX) and the Nasdaq Composite Index (COMP) to new all-time highs last month.

Davis warns a conflict between Europe and the United States could bubble up to surface despite the fact that Trump took no action on November 14 after a deadline he imposed to put in place national security tariffs of up to 25% on auto imports from the European Union, Japan or South Korea his threats against members of the EEU this week only serve to draw attention to her warning. While Trump insists he has deals in place with Japan or South Korea they have yet to be memorialized, signed and approved by Congress.

Meanwhile, Politico reported on November 2nd, the Trump administration was weighing whether to start a new trade investigation against the European Union. The website said that such a move would mean…

“European auto imports wouldn’t be subject to duties out of national security concerns, but the trading bloc would be subject to a much broader inquiry.”

In October 2017, Davis accurately predicted the U.S. stock market was about experience an ugly period. Four months later, it did, in spectacular fashion. She then warned the bullish sentiment in the technology and the internet-related sector was at risk, she cautioned in July 2018 the U.S. market’s bullish run—notably among tech-centered shares—was set to come apart against the backdrop of a tumbling international market. His latest warning seems increasingly likely to come true after President Trump’s warnings the past few days in London.