President Trump and A.G. Barr have Formed Their Own Gestapo! 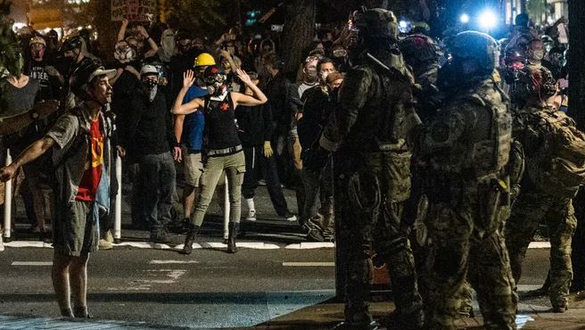 Be afraid, be very afraid. The President of the United States and his attorney general are lawless fascist criminals that now have a secret police force, their own lawless Gestapo that will illegally arrest, imprison, torture, and starve peaceful protesters.

The political ad also shows what life will be like if the American public gives Trump a second term or if he seizes dictatorial power. It’s a frightening glimpse at the Gestapo nightmare. We would see if he is re-elected.

The ‘Really American PAC’ ad shows President Trump’s secret police outfitted like SWAT teams or paramilitary thugs physically attacking U.S. citizens protesting against police violence. The audience is supposed to be shocked by the protester's violence. Instead, it shows Trump’s goons and thugs violating their oaths as Federal law enforcement agents beating peaceful protesters with bats, batons tear gassing them, as well as striking and shoving them to the ground.

The sharply-edited video includes audio of President Trump calling protestors “animals,” and his infamous remarks, bragging to police, telling them, “please don’t be too nice” to suspects when they are arresting them. It also features his heinous quotes…

“You have to dominate the streets.”