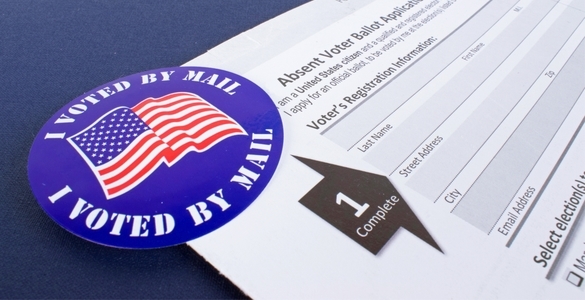 Trump says Democrats’ push to expand voting by expanding the number of days to 20 before elections and expanded mail-in voting threatens Republicans’ ability to win elections.

President Trump finally revealed that many Republicans live in fear of genuine democracy that makes it possible for more people to vote and, in doing so, his fear over losing his re-election bid in November. Trump expressed criticism over attempts by Democrats in Congress to expand voting access for the presidential election in the fall, saying increased voter turnout would keep Republicans from getting elected.

In doing so, he gave the Democrats another viral video weapon and campaign commercial former Vice President and political action committees to use against him in the run-up of the November election.

Trump admitted the Democrat-proposals voting reforms and expansion initially was included in the $2.2 trillion rescue package passed last week by Congress — which were mostly cut from the deal — would have led to…

“…levels of voting, that if you ever agreed to it, you’d never have a Republican elected in this country again.”

Democrats continue to push to mandate that all 50 states make plans to expand early voting by extending the number of days for voting to begin at least 20 days before elections.  This is so people can maintain social distancing and also allow mail-in balloting for the fall election if the coronavirus pandemic makes in-person voting unsafe.

Trump appeared on Fox News’ morning program, “Fox & Friends,” this morning for nearly an hour and at multiple points complained that congressional Democrats had pushed to include things he did not like in the rescue package. These inclusions were to make it easier for citizens to vote. Making clear he’s against democracy – an extremely dangerous thing to admit openly given his bungling and mishandling of the coronavirus epidemic.

Trump went after House Speaker Nancy Pelosi, who put forward a plan for $4 billion in aid to states to help them prepare for a likely scenario: a presidential election in the fall amid an ongoing pandemic.

It’s one thing for the President to think that voting is a super-radical left policy; it’s another to admit it on camera.

Pelosi’s proposal is similar to a plan proposed by Senator Amy Klobuchar, D-Minn., and Sen. Ron Wyden, D-Ore., would have mandated that every state allow voters to cast no-excuse mail-in ballots. Currently, 17 states require voters to provide a reason why they would like to vote by mail.

The Pelosi voter legislation plan also would mandate each state to be ready to mail ballots to every voter if there were a severe coronavirus outbreak in that region or state.

Pelosi’s plan would have included two weeks of early in-person voting leading up to Election Day, to allow those who wanted to vote in-person to do so without creating long lines or big crowds at polling places.

The coronavirus rescue package, which President Trump signed into law on Friday, included $400 million to assist states with preparing for the fall election. One study estimated that it would cost at least $2 billion to prepare for a fall election amid a pandemic.

Trump said on Fox News that the voting changes proposed by Democrats were “crazy” admitting these voting reforms would lead to higher levels of overall turnout and would disadvantage Republicans on election day. Trump lost the popular vote to Secretary of State Hillary Clinton by almost 3 million votes in 2016 despite Trump’s insistence of winning by a landslide.

Republicans have become notorious for erecting obstacles to voting in numerous states over the past two decades to fortify their political advantage against demographic trends that favor Democrats.