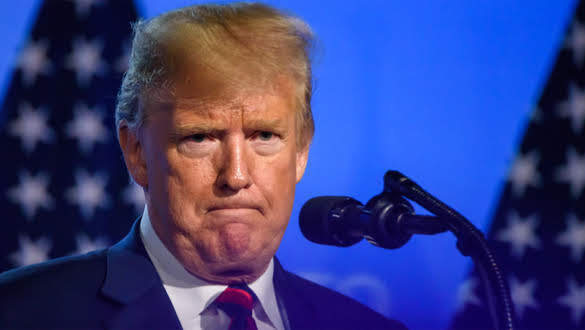 President Trump is losing what was left of his sanity as it becomes more apparent that Vice President Biden won the election and will become the 46th President of the United States.

No matter that the conspiracy theories he’s Tweeting have been disproven, President Trump is cornered. His losing the election put him, his three oldest children, and dozens of his sycophants are potentially federal and state prosecutions when his term ends in 69 days on January 20, 2021. This is driving his desperation to somehow hold on to the Oval Office.

His latest meltdown Tweet is yet another all-caps meltdown this morning. It is based on a bogus report from One America News that falsely claimed a computer program deliberately deleted votes for the president.

In this latest tweet, the president promoted a ridiculous conspiracy theory making the rounds on far-right alternative fact websites claiming that Dominion Voting Systems programming installed on voting machines switched votes for him to Biden votes. The president says this cost him the 2020 election.

The New York Times and other major news media outlets have already examined Dominion’s claim and have found it to be false, however.

“The Dominion software was used in only two of the five counties that had problems in Michigan and Georgia, and in every instance, there was a detailed explanation for what had happened,” the Times found. “In all of the cases, the software did not affect the vote counts.”

The president’s false Twitter rant drew shocked reactions, including from CNN’s Jake Tapper, who described the tweet as “lunacy.”